Playboy and Jazz: A History

The Playboy Jazz Festival in Chicago, the first American indoor jazz festival, produced in 1959, drew more than 68,000 fans at a top dollar price of $5.50 for five shows. 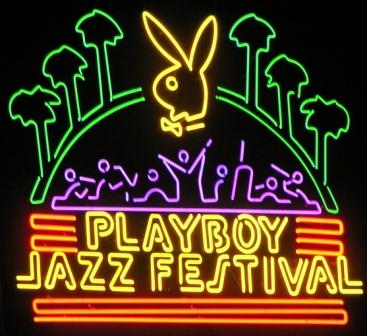 In his welcoming remarks to that one-of-a-kind gathering, PLAYBOY founder and then Chairman Hugh M. Hefner said, “Music critic Leonard Feather called the first Playboy Jazz Festival (in 1959 in Chicago) one of the greatest weekends in the history of jazz, and I hope and expect that this weekend at the Hollywood Bowl will be remembered in the same way."

Now, in its 32nd year, the Playboy Jazz Festival has become an internationally acclaimed festival, and emerged as the West Coasts premier jazz event. Since that landmark first gathering, the Playboy Jazz Festival has been responsible for exposing nearly a million people to more than 300 hours of jazz, presented by countless hundreds of musicians in some 150 configurations.

Virtually every jazz legend has performed at the Festival and many of todays most popular jazz artists--including Los Van Van, Bobby McFerrin and Kenny G--received their first major exposure on our stage at the Hollywood Bowl.

Indeed, that two-day event 32 years ago was hailed by all the critics as a triumphant rejoining of PLAYBOY and performance jazz and, even before the reviews had come in, Hef had taken the stage to announce his decision to make the unprecedented get-together an annual event!

Years later, jazz critic Feather was to write, “Hefner revived the Playboy Festival in 1979 at the Hollywood Bowl. It became instantly clear that this would have to be an annual event, and this time, nothing deterred Hef from staying the course."

Of course, that a yearly celebration of outstanding jazz would become a Playboy hallmark should come as no surprise.

Although when one thinks of PLAYBOY magazine, the glamorous centerfolds and thought-provoking interviews are often the first things to come to mind, Playboy has had an equally long and mutually beneficial relationship with jazz.

Ever since a feature on the Dorsey Brothers graced the inaugural issue of PLAYBOY fiftyfive years ago, the magazine has been involved with jazz in one way or another. And it's not surprising, since PLAYBOY founder Hugh M. Hefner has long maintained an avid interest in music. “I still associate with jazz more than with any other form of popular music," he has often explained.

Since the 1953 Dorsey Brothers feature, numerous innovative articles on jazz and the entertainers who perform it have run in PLAYBOY. In 1957, the entertaining and very popular PLAYBOY Music Polls started out as a jazz-oriented feature. The first of the famed PLAYBOY interviews focused on trumpet great Miles Davis in September, 1962. That interview was conducted by a then little-known writer named Alex Haley. Add to that the fact that a compilation album made from tunes by the winners of the inaugural Jazz Poll was the first-ever jazz foray into the world of stereo records, and PLAYBOY's commitment to jazz becomes clear.

In similar fashion, Playboy has been the source of much landmark jazz on records. In 1957 and 1958, the company produced Volumes I & II (two record sets) of its Playboy Jazz All-Star series, spotlighting a host of jazz legends from Frank Sinatra, Louis Armstrong and Erroll Garner to Jack Teagarden, Dave Brubeck, Gerry Mulligan and more.

Next came the international Playboy Clubs and Hotels and two Playboy television series, “Playboy's Penthouse" and “Playboy After Dark." The clubs not only brought music fans into new jazz venues form New York to London to Los Angeles, but provided an established jazz circuit where such legendary greats as Nat King Cole, Count Basie, Bobby Short, Lambert, Hendricks and Ross, to name a few, could be seen performing 52 weeks a year.

Jazz music also played a major role in establishing the widespread appeal of both shows, which regularly showcased the greatest names in the genre. Just a sampling of the legends who appeared on Hefs late-night TV shows include a constellation of stars from Buddy Greco to Buddy Rich, Roberta Sherwood, Cannonball Adderley, Sylvia Sims, Kai Winding, Vic Damone, Della Reese, the list goes on and on.

In 1978, Playboy celebrated its 25th anniversary with a jazz/pop compendium release. The selections were all drawn from Playboy's 25th Anniversary Tour of Music, a radio spectacular heard on stations coast to coast. The set featured more than a dozen outstanding jazz artists.

But that is far from all there is.

Above and beyond the magazine's involvement with jazz have been the now-annual Playboy Jazz Festivals. Produced for 32 consecutive years by Darlene Chan and George Wein (who also produced the first Newport Jazz Festival in 1954, and the man Newsweek magazine credits as being “the most responsible for turning jazz into a summer staple"), the Festival has featured a stellar roster of jazz legends, among them Grammy Award-winners Count Basie, Dizzy Gillespie, Sarah Vaughan, B.B. King, Miles Davis, Carmen McRae, Chick Corea, Gerry Mulligan, Etta James, Wynton Marsalis, Stevie Ray Vaughan, Tony Bennett and Mel Torme. The 32nd Playboy Jazz Festival, set for June 12th and 13th, presented in cooperation with the L.A. Philharmonic Association at the now-traditional Hollywood Bowl site, is sure to follow suit.

The Playboy Jazz Festival in Chicago, the first American indoor jazz festival, produced in 1959, drew more than 68,000 fans at a top dollar price of $5.50 for five shows. Stars included Duke Ellington, Ella Fitzgerald, Count Basie, Oscar Peterson, Louis Armstrong and Bobby Darrin. A three-record set produced by Playboy based on the first Festival was a smash hit that has since become a treasured collector's item.

In 1982, the Playboy Jazz Festival was captured on record and video for a worldwide audience. The two-record set and two-volume videocassette release starred Nancy Wilson, Grover Washington, Jr., Art Farmer, The Manhattan Transfer, Weather Report, The Dexter Gordon Group and many more.

Currently, Playboy is in discussions with a view toward expanding the Playboy Jazz Festival to numerous venues both foreign and domestic, and in 1994 the Playboy Jazz Festival took to the road in the United States for the first time. A series of mini-festivals headlined by the Grammy-winning vocalist Al Jarreau, and including such greats as David Sanborn, George Duke and Marcus Miller, played to enthusiastic audiences in Atlanta, Detroit, Denver and Washington, D.C., culminating with an entire weekend of jazz entertainment at three separate venues in Playboy's 5 hometown -- Chicago. By continuing the tradition started by Hef in 1959 of presenting great jazz legends side-by-side with up-and-coming young talent, the Festival continues to garner many new fans from all parts of the globe while continuing to provide groundbreaking music and unique show-stopping energy.

In 1996, the Los Angeles Times wrote that “Playboy extended the annual Hollywood Bowl Jazz Festival into year-round programming with a series of stellar events at the Alex Theatre in Glendale, California.. Launched in September, in association with the Playboy Jazz Festival, the “Playboy Jazz Festival In Concert" series debuted with Marcus Roberts with the Academy of the Ascension Orchestra in what the Times later termed the number one jazz event of the year in Southern California. Subsequent concerts in the series featured such jazz greats as George Shearing, the Charlie Haden Quartet West, Billy Taylor and Ramsey Lewis and Joshua Redman.

Perpetuating its commitment to jazz in the new century, Playboy Enterprises International entered into a strategic alliance and collaboration with Concord Records to form a new record label in 2001, Playboy Jazz. Blonde, the soundtrack from the CBS mini-series based on the life of Marilyn Monroe, (who was featured as the very first centerfold in the first issue of Playboy Magazine in 1953), was the labels initial release, and earned arranger/composer Patrick Williams a 2001 Grammy nomination for Best Instrumental Composition for the title track. In 2002, Playboy Jazz releases including Patti Austins For Ella and Tommy Flanagan's Sunset and the Mockingbird from A Great Night in Harlem continued the Grammy nomination tradition.

Under the Playboy Jazz label, a wide range of recordings were released from compilations and themed albums, to live recordings as well as soundtracks.

Featuring a diverse line-up of top talent, the distinguished series brings the jazz experience directly into the community, allowing thousands of Southland residents from Beverly Hills to Watts to enjoy the music while fostering a greater awareness of jazz among the general public.

Most notable among these free events is the standing room only Jazz on Film night, held at the Los Angeles County Museum of Art and hosted by acclaimed film archivist Mark Cantor, as well as Playboy Jazz at Warner Center Park. The weekend long event annually attracts thousands of jazz lovers from all over the San Fernando Valley and beyond.

In 1991, jazz critic A. James Liska wrote, “Without being able to play anything other than the radio, Hugh Hefner exercised an important influence on jazz. Hef's willingness to present jazz on such a large scale -- and be successful at it -- has no doubt further served the music by showing the doubting Thomase's of the music industry that there is indeed an audience for jazz. Maybe Hef hasn't influenced the way jazz music is played, but he sure has influenced the way it's heard."