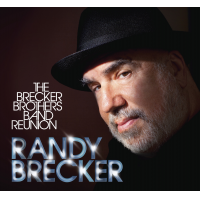 Throughout the 1970s and 1980s, trumpeter Randy Brecker and his younger, sax-playing brother Michael helped define a sub-genre by blending sophisticated jazz harmonies and searing solos with slamming funk grooves and a visceral energy that grabbed rock ears. The Philly-born Brecker Brothers set the tone for a generation of aspiring musicians who followed.

“When the band started back in the day, the original intent was to do a Randy Brecker record," Randy explains. “We were rehearsing tunes every week with Michael, Don Grolnick, David Sanborn, Steve Khan, Chris Parker and Will Lee. Somehow, producer Steve Backer had gotten wind of the rehearsals. He knew of us - Michael and I had played together in Dreams, Billy Cobhamʼs band and Horace Silverʼs quintet. He rang me and said, ʻIf you call this band The Brecker Brothers, Iʼll sign you tomorrow to Clive Davisʼ new label, Arista Records.ʼ" Randy recalls his first inclination was to say no, because “I wanted to do my own record," but he ultimately relented. “And thatʼs how this whole thing started."

Sadly, in 2005 Michael Brecker was diagnosed with the blood disorder myelodysplastic syndrome (MDS), and died from complications of leukemia on January 13, 2007.

During the process of assembling a band for a week-long engagement at New York Cityʼs Blue Note jazz club last year for a solo record, Randy realized that all the musicians he has contacted have played in various editions of The Brecker Brothers Band: bassist Will Lee (who served the earliest incarnation of the group in the mid-ʻ70s), along with guitarist Mike Stern, keyboardist George Whitty and drummer Dave Weckl (veterans of the early ʻ90s edition). Filling in for his late brother is saxophonist Ada Rovatti, an accomplished improviser and bandleader, also known as Randyʼs wife and the mother of their four-year-old daughter, Stella. “Here it is 30-some years later, Iʼm getting set to do another solo record, and the Brecker Brothers thing creeps in again," Randy says. “In fact," he continues, “the club billed it as 'Brecker Brothers Band Reunion'. At first I wasnʼt crazy about the idea. But the week was sold out, it became an event, and fans loved hearing the old tunes along with the new ones. I realized this band was my legacy."

This set of original compositions, among them tunes like “Some Skunk Funk" and “Straphangin", brings back the excitement of the 70s with the technological advances of the 21st century. Add to the mix, the appearanc eof Randroid, a vocalist fans of Randy Brecker will recognize.