SOURCE: ALL ABOUT JAZZ PUBLICITY
March 4, 2009
Sign in to view read count 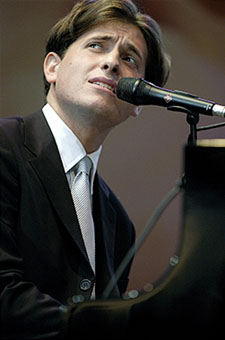 slideshow
Don't think for one minute Peter Cincotti is just another handsome face combined with a captivating voice. Or merely the latest in a string of mellifluous musicians reaching for a fusion of soul, pop and jazz (though he did attract the attention of Harry Connick Jr. early in his career--forestalling the competition perhaps?).

Cincotti is attempting the altogether difficult task of dissecting human emotion through music, the significance of which ambition may seem less than a distinctive mission until you hear him. He is chameleonic, to say the least.

After two well-recognized albums for Concord, the New York native Cincotti moved, at least symbolically, to the left coast and his music moved similarly, in a more pop-oriented direction encouraged further by the collaboration on his third album with David Foster, one of the genre's modern masters. Equally earthy and cerebral, and narrowly but emphatically skirting sentimentality, East of Angel Town (Warner Brothers/Sire, 2009) finds the pianist/vocalist performing all-original material, after the previously-released amalgamations of standards and self-penned songs.

AAJ contributor Doug Collette spoke with Cincotti about the recording of East of Angel Town and working with producer David Foster.