Incendiary Jazz And Soul Artist And One Of The UK’s Best Interpreters Of Modern Classics Releases Live Album With Special Guests. 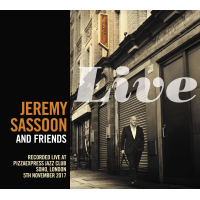 Fully capturing the charged atmosphere of the evening’s live event, Jeremy Sassoon And Friends Live features a diverse repertoire of songs, including an evocative interpretation of the Glen Campbell classic “Wichita Lineman," performed as a tribute to Campbell’s passing which occurred around the time of the concert. Further homages are paid to the late Walter Becker of Steely Dan through Sassoon’s renditions of the songs “FM" and “Peg," as well as a unique and exceptional version of the Beatles “Eleanor Rigby" performed in an inimitable style.

Jeremy Sassoon is joined on stage by Berlin-based drumming legend Michael Kersting, well known for playing with the likes of Jaco Pastorius, Chet Baker and Randy Brecker. The multi-award winning saxophonist Alexander Bone (British Jazz Awards Rising Star winner and BBC Young Musician Of The Year) also lends his talent to the band. The line up is rounded off by bassist and multi-instrumentalist producer Jasper Wilkinson (Sister Sledge) and Richie Aikman, described by Sassoon as “one of the most exciting young guitarists I've seen in years.”

Previously a medical doctor and hospital psychiatrist, Jeremy Sassoon found his first big break in the music industry as MD for the American Jazz / R&B artist Dana Bryant, performing with her at the North Sea Jazz Festival. Later he launched the Ray Charles Project, a 17-piece big band spectacular, performing the songs of the legendary artist, featuring guitarist Mike Walker (The Impossible Gentlemen) and saxophonist Iain Dixon (Joni Mitchell / Bryan Ferry), as well as many other notable musicians. Now a regular on the international touring circuit, Jeremy Sassoon has decided to release some compelling recorded material to demonstrate what he and his band do best.

In celebration of Jeremy Sassoon And Friends Live, the band will perform a series of shows in the build up to its release, including a triumphant return to the PizzaExpress Jazz Club on 6th & 7th July 2018, followed by three dates at Berlin’s A-Trane Jazz Club from 19th-21st July and the Manchester Jazz Festival on 22nd July.

Jeremy Sassoon And Friends Live is a vivid and captivating recording of an excellent live show, destined to be enjoyed by adventurous music lovers with wide-ranging tastes. The forthcoming dates will be a chance to witness Jeremy Sassoon and his razor-sharp band in real time. Both are ideal ways to discover a class act at the very top of their game.