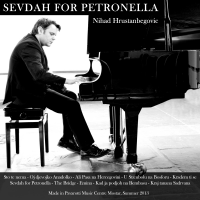 For the first time in nineteen years, last summer , Nihad Hrustanbegović held concerts in his born country Bosnia and Herzegovina, in cities such as Zenica and Tuzla, and at the opening of 19th Sarajevo Film Festival. Inspired by Bosnia-Herzegovina and its people, Nihad Hrustanbegović decided to record two new albums. One of them: “Sevdah for Petronella”, the first solo piano album in the history of music in Bosnia and Herzegovina dedicated to sevdah music and the second “Black Orpheus” where he plays jazz on the concert accordion and dedicates the new composition Sky Blue to the city and people of Amsterdam. Within “Sevdah for Petronella”, there are eight famous sevdah songs from Bosnia-Herzegovina and 2 new compositions; one named “The Bridge” and the eponymous title track “Sevdah for Petronella”.

In musical terms Sevdah translates into a slow medium tempo with intense emotional melodies. Sevdah songs are full of love and passion, they are very familiar to Fado and Flamenco. The ancient and immortal Sevdah is a cross-over style which forms a bridge between the West and the East with presence of eastern influences with the combination of Sephardic and European elements. Sevdah communicates pure joy and sadness in true love and an emotional, physical and spiritual desire to be close to each other. “Sevdah for Petronella” is full of life experiences that have taken place in Bosnia, France and the Netherlands.

The track list of the second album; “Black Orpheus” includes eight covers of the famous Jazz and Film composers. The album is a combination of pop music with a French and American retro style from the 20's up until the 50's, incorporating different sounds and techniques of the modern concert accordion. The album is a statement and homage to the city of Amsterdam, and it’s a retrospective of the time he played with The Jazz Orchestra of The Concertgebouw Amsterdam: Al Di Meola and Mozes Rosenberg. In addition it looks back to the time when he worked as a professor of the concert accordion in jazz and pop musical styles at the “ArtEZ Conservatorium” in Arnhem, the Netherlands.

In his choice of music style, the composer shows his skills within and love for both sevdah and jazz. On the one hand by giving an interpretation of sevdah music on the piano and on the other hand through his interpretation of jazz on the concert accordion. The most famous composition of Nihad Hrustanbegović so far is definitely the piece “World promenade”, which was used as soundtrack of the “Heineken Extra Cold” TV commercial. The track “Balkan Sorrow” was used on the soundtrack of the Swiss short movie “Zimmer 606”.