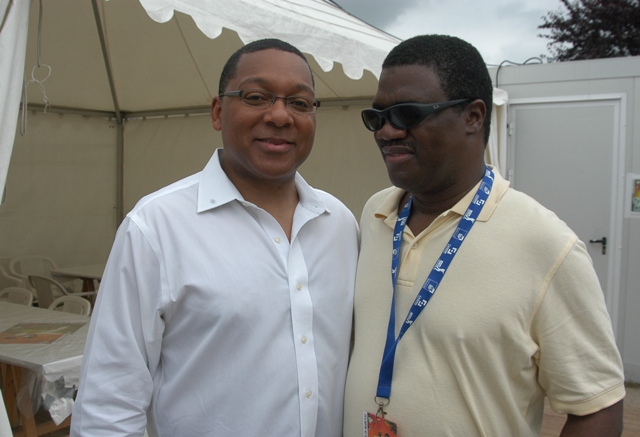 Marcus Roberts' New Orleans Meets Harlem, Vol. 1, his first new album since 2001's acclaimed Cole after Midnight, is set for release on March 31. Roberts, fluent in the diverse vocabulary of jazz piano spanning the entire twentieth century, is known for the ways in which he has integrated the contributions of jazz greats such as Jelly Roll Morton, Fats Waller, Scott Joplin, Duke Ellington or Thelonious Monk to create a sound and style that is entirely his own.

As written in the New York Times, “Mr. Roberts has probed jazz piano tradition deeply to develop something distinctive. He does more than bring the history of jazz piano to life; he explodes and recombines that history in the moment, offering something old and new together, making his art powerfully original and compelling.” The same could be said of the Marcus Roberts Trio. Roland Guerin (bass) and Jason Marsalis (drums), members of the Marcus Roberts Trio for more than a decade, accompany Roberts on the album, forming “[one] of the most satisfying and directly enjoyable piano trios in jazz," according to the New York Times. Their new album is set for release April 1 via TuneCore and online, timed to celebrate Duke Ellington's 110th birthday, which would have been April 29.

In the liner notes to the new album, Roberts writes, “We recorded 'New Orleans Meets Harlem' to show how New Orleans music impacted the music of the later Harlem style as shown through the eyes and music of five pianist/composers of those eras."

One of the world's preeminent jazz pianists, Roberts has earned widespread praise in his twenty-plus-year recording career. From the New York Times: “Perhaps no other jazz musician inhabits the space between the music our grandparents called jazz and bold, bullish art-music as comfortably as the pianist Marcus Roberts." TIME Magazine said, “Roberts demonstrates his technical virtuosity and passionate intelligence in impressive fashion. And yes, with soul."

Roberts serves on the faculty of Florida State University as Assistant Professor of Jazz Studies. He tours most often with his trio but with larger ensembles as well. He is a gifted solo pianist who has given many prestigious solo recitals. He and his trio also perform regularly with symphony orchestras around the world, including the Chicago Symphony, the Berlin Philharmonic, the New Japan Philharmonic, the Atlanta Symphony Orchestra and countless others. Roberts counts several #1 records to his credit from the Billboard Jazz Album chart. Roberts has appeared on Charlie Rose (PBS), on Nightline (ABC), in the broadcast of the Hurricane Katrina benefit concert “Higher Ground", in a world-wide television broadcast (with the Berlin Philharmonic) of Roberts’ Gershwin orchestra arrangements, and in many other similar events.