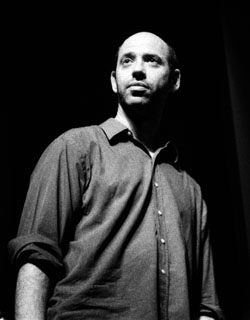 slideshow
Argentine pianist, composer, and bandleader Guillermo Klein is a musician for the global age. He grew up in Buenos Aires, studied in Boston, made his name in New York, returned home for two years, and then relocated to Barcelona. His wife is American; his children are Spanish. His most famous band, Los Guachos, has an international cast that has included the likes of Miguel Zenon, Chris Cheek, Bill McHenry, Luciana Souza, and Jeff Ballard, and features an adventurous genre-defying sound.

They will hold sway New York's Village Vanguard from June 10-15, 2008 in support or their latest album, Filtros (Sunnyside, 2008), and will appear at the JVC Jazz Festival in Newport, RI, in August.

Eric Benson's interview with Klein sheds light on the pianist's unique fusion of the Argentinean folk tradition, European classicism and the sophisticated harmonies of modern jazz.

In addition to Benson's in-depth interview, AAJ is also publishing a review of Filtros today, and you'll be able to listen to “Va Roman," Filtros' opening track, as AAJ's Download of the Day.

Check out Guillermo Klein: Muse and Roots at AAJ today!