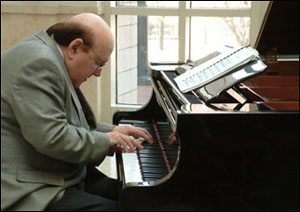 After nearly three-quarters of a century, Jack Reilly's career is hardly in need of queries from one more interviewers--questions about his past associations, his musical history or his previous recordings and accomplishments. These have been fairly well documented. The accomplished and well-traveled pianist/composer, though undeniably obscure to the general public, has made an indelible mark in both the classical and jazz worlds--especially through his ability to marry two seemingly disparate musical styles, classical and jazz, in ways that continually bring out the best of both traditions while creating an exciting new music greater than the sum of the constituent parts.

Reilly's recent bout with life-threatening prostate cancer (2002) proved a life and career-defining moment that he used as the source for yet another musical journey. His recent Innocence - Green Spring Suite (Unichrom, 2007) is a series of compositions that Reilly wrote as a tribute and expression of gratitude to the team of medical and spiritual people who helped him through this most difficult time of his life. Despite this singular achievement, Reilly continues to be a man in motion, as though determined to maximize the potential of each of the extra seconds that has been given him. In 2002 he was commissioned by the Keweenaw Symphony Orchestra to write and perform his piece “Orbitals," a concerto for jazz-piano trio and symphony orchestra. He also continues to record in the traditional solo piano, jazz trio and jazz quartet formats--both in the studio and in regular live performances throughout the United States and Europe.

AAJ contributor Ralph A. Miriello spoke with Reilly at length about his long and varied career.

Check out Jack Reilly: Making the Most of the Gift of Life at AAJ today!