It's an instrumental jazz trio record, but the mission is to get this music played more widely outside of church, and to bring these jazz interpretations into circulation inside churches. The album is almost a demo for church music directors, and the arrangements are meant for congregational singing. 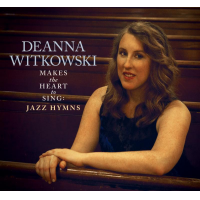 slideshow
Grace, serenity, and rhapsody are on abundant display throughout the 14 songs pianist Deanna Witkowski performs with her trio on Makes the Heart to Sing: Jazz Hymns, set for release November 3 on Tilapia Records. One would expect this to be the case, given that the source material is not the Great American Songbook, but the centuries- old trove of hymnody used in churches around the world.

Witkowski succeeds in offering a luminously lyrical piano trio session interpreting a spiritually charged body of music rarely investigated by jazz artists. Some of the tunes—like “Kings of Orient (We Three Kings)”—will be immediately recognizable to secular audiences while others will be as familiar to the choirs and congregations of Protestant churches worldwide as the standards of Porter or Gershwin. Her arrangement of “Hymn to Joy (Joyful, Joyful, We Adore Thee),” the popular Beethoven melody from his 9th Symphony, rises with the grandeur of an Ellingtonian theme.

Makes the Heart to Sing: Jazz Hymns is part of a larger project that includes the publication of a folio of Witkowski’s arrangements. “It’s an instrumental jazz trio record, but the mission is to get this music played more widely outside of church,” she says, “and to bring these jazz interpretations into circulation inside churches. The album is almost a demo for church music directors, and the arrangements are meant for congregational singing.”

Witkowski is passionate about the primal, transporting power of group singing, and her trio brings a similar collective ethos to the music on the album. She’s played with drummer Scott Latzky since she settled in New York City two decades ago, having moved there with a full-time job as a church music director after earning her degree at Wheaton College in 1993 and working for four years on the Chicago jazz scene. Bassist Daniel Foose is a more recent collaborator. “Scott’s playing is so sensitive and responsive to every environment,” she says. “Daniel is really soulful and interactive with a groove that’s really deep.”

What’s most striking about the project, aside from the sheer beauty of the trio’s feel and dynamics, is the seamless way the hymns fit the jazz idiom even as Witkowski pays close attention to the contours and meaning of the text. Most of the tracks clock in under four minutes and focus on the group’s irresistibly swinging interpretations of music rather than using the themes as launching pads for extended solos. “Kings of Orient” is set as a waltz whose intensity ebbs and flows and features a Foose bass solo, while “Foundation (How Firm a Foundation)” unfurls with the rolling cadences of a gospel music hit. The aforementioned “Hymn to Joy” adds a taste of laidback funk and soul to the set.

The winner of the 2002 Great American Jazz Piano Competition, Deanna Witkowski has released six critically hailed albums over the past two decades, with each new project revealing a steadily evolving sensibility marked by melodic invention and emotional connection. As an accompanist, she’s toured with soul-steeped vocalist Lizz Wright and held down the piano chair for ten years in the Jim McNeely–led BMI/New York Jazz Orchestra. Her projects as a leader feature fellow heavyweights like bassist John Patitucci and saxophonist Donny McCaslin.

Witkowski’s thoughtful and deeply felt work setting traditional hymns in a jazz context has few precedents. In many ways, her creative identity is built on her gift for gracefully bringing together seemingly disparate elements, though Makes the Heart to Sing flows directly from her longtime work in sacred settings.

“Music in a lot of churches is one specific thing, traditional hymns done in a traditional way, or contemporary pop that’s not necessarily written for group singing,” she says. “But there’s this ‘folk music tradition’—hymns—that everybody knows in most Protestant churches. I always draw on my jazz background when I arrange service music, and hymns are an integral part of the repertoire.”

Witkowski also has a long-standing relationship with Brazil, and her next project promises to be equally compelling. As a recipient of a prestigious residency fellowship from the Sacatar Institute in Bahia, Brazil, a nonprofit foundation that sponsors creative individuals of all disciplines, she will spend April and May 2018 at Sacatar doing research related to her upcoming composition and recording, the Nossa Senhora Suite. Merging elements of Afro-Brazilian ritual chants and text with new music for her quartet plus four vocalists, each movement of the suite will explore a different Brazilian version of the Virgin Mary, including Nossa Senhora Aparecida, patron saint of Brazil, and Iemanjá, goddess of the seas.