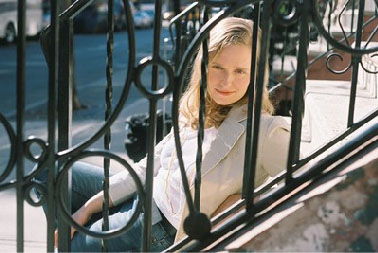 [Earle’s Songs for a New Day is] a breezy delight. -Time Out New York

Both Earle and Witkowski began composing sacred music while working as church music directors: Witkowski, in 1997, when she moved to New York with a position at All Angels’ Church on the Upper West Side; and Earle, in 2006, when she began working at Trinity Episcopal Church in Cliffside Park, New Jersey. Each has composed two Mass settings and numerous hymns and Psalm settings; Witkowski's work initially focused on a gospel choir, while Earle drew from her background in jazz and contemporary music. Besides showcasing their current sacred music, Witkowski and Earle will each contribute one new piece for collaborative set, where each will compose a new setting for the Magnificat (the New Testament canticle where the Virgin Mary proclaims God's liberation).

Winner of the Great American Jazz Piano Competition in 2002, Deanna Witkowski has been praised for her rich fusions of jazz, Brazilian, and Afro-Cuban music. Her fourth recording, From This Place (Tilapia Records, 2009), marries ancient and modern sacred texts with the richness of jazz. The recording’s core quartet (Donny McCaslin, John Patitucci, Scott Latzky) is broadened by the addition of guest vocalists Laila Biali, Peter Eldridge, and Kate McGarry. This soulful, genre-defying work has widened Witkowski’s audience base with media interviews on National Public Radio’s Weekend Edition Sunday, Interfaith Voices, National Catholic Reporter, and Busted Halo. In May 2009, Witkowski presented Moving with the Spirit: The Sacred Jazz of Mary Lou Williams at the Kennedy Center’s Mary Lou Williams Festival; in 2008, Moving was been presented at Duke University and the International Association for Jazz Education conference. Since 2005, Witkowski has been the pianist in the BMI/New York Jazz Orchestra; she has also performed and/or recorded with Lizz Wright, Vanderlei Pereira’s Blindfold Test, James Finn, the Schumacher/Sanford Sound Assembly, and Joseph C. Phillips’ Numinous.

Originally trained as a pianist, Brenda Earle started singing in her early twenties in an effort to better connect to her songs and audiences. As a pianist, she has performed and/or recorded with Donny McCaslin, the Numinous Ensemble, Dick Oatts, John Riley, Wycliffe Gordon and the DIVA Jazz Orchestra. In 2007, Earle’s piano playing was recognized when she was selected as a finalist at the Mary Lou Williams Jazz Piano Competition. She has performed at the Kennedy Center, the Ravinia Festival, the Clifford Brown Jazz Festival, the Toronto Jazz Festival and in clubs and festivals across the US, Canada and New Zealand. Earle’s Sacred Voices Project encompasses original settings of Psalms, the Catholic Mass, gospel music and unique arrangements of spiritual works, which combine her diverse influences which range from jazz to rock to Brazilian and classical traditions. Her exciting and intriguing vocal writing features some of the top emerging artists in New York City.