Pianist/Composer Nik Bartsch Interviewed at All About Jazz

SOURCE: ALL ABOUT JAZZ PUBLICITY
December 6, 2010
Sign in to view read count 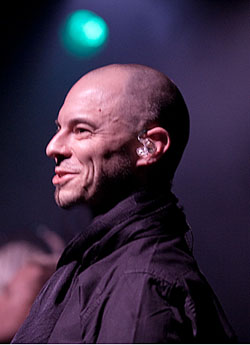 slideshow
Pianist and composer Nik Bärtsch would be the first to recognize that he is no revolutionary, as his aesthetic vision draws inspiration from multiple sources, ranging from 20th century classical music to funk, and from Japanese ritual music to minimalism. The distillation of all these sounds results in a music that invites meditation and at the same time urges you to move to the groove—something of a feat, it has to be said. Whether or not Bärtsch's group, Ronin, has evolved quickly or slowly in its first decade of existence is a relative matter, but evolve it most certainly has. An organism that began life as a trio at the beginning of the decade, Ronin soon became a quartet and then a quintet. Yet despite the addition of musicians over the years, the band seems to be heading towards a reduction in sound.

On Llyrìa (ECM, 2010), there is less of the obvious groove that characterized the band's previous ECM recordings. The band sounds looser, though the music remains notated for the most part. In the past, if the band used rhythm to accomplish melodic functions, here the emphasis is more on melodic development; a greater lyricism pervades the compositions. The increased space in the structures allows more room for reed man Sha to assert his presence, though there is less of a role for the contrabass and more opportunity for the alto saxophone to color Bärtsch's “Moduls." This greater emphasis on space and the resultant new sounds that occupy these spaces has much to do with Bärtsch's interest in architecture and dramaturgy— the construction of spaces.

All About Jazz's Far East correspondent, Ian Patterson, spoke with Bärtsch about the gradual but inevitable evolution of Ronin over the years, and the seemingly disparate influences—musical and otherwise—that inform the instantly recognizable work of this carefully considered composer and bandleader.

Check out Nik Bartsch: Rhythmically Dancing Around Fugato Fires at All About Jazz today!