SOURCE: ALL ABOUT JAZZ PUBLICITY
July 23, 2007
Sign in to view read count 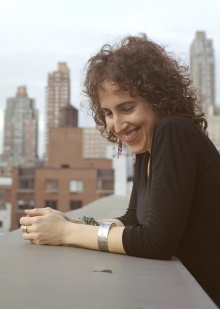 slideshow
While her discography as a leader consisted, until this year, of only one self-released album (Peel, 1999), New York-based, Israeli-born composer/pianist Anat Fort has been working steadily for years. Few contemporary jazz pianists have as graceful and developed a playing style as Fort--her use of rests, her love of space, and her classically-imbued phrasing are, once you've encountered her, immediately recognizable. She's just as good a composer, however, and it's the songs on her 2007 ECM debut A Long Story that make the greatest initial impact on the listener. Many critics have remarked upon a Middle Eastern influence in her music--but really, there are all sorts of influences in there, and Fort's sound and sensibility is her own. If A Long Story sounds like it belongs on ECM--and, with its crystalline piano sound and pensive, hyperalert interplay between Fort, bassist Ed Schuller, drummer Paul Motian and, on some tracks, clarinetist Perry Robinson, it does--the story of its creation and very eventual release on the label is more complicated than meets the ear.

It hasn't always been easy for Fort in jazz-saturated New York, especially since, as she notes, she is neither a straight-ahead jazz player nor a Downtown improv iconoclast. But A Long Story is the best jazz piano recording of 2007--so far, anyway--and it's bringing Fort the attention her talent deserves.

Contributing Editor Paul Olson caught up with Fort recently, for a discussion about how she found her way to ECM records, integrating her cultural Israeli roots with a Downtown New York aesthetic, and more.

Check out Anat Fort: Swimming in a Sea of Motian at AAJ today!