SOURCE: MICHAEL RICCI
May 18, 2009
Sign in to view read count
On the back-wall mural at the Village Vanguard, the famous jazz club in Greenwich Village, a primordial man and woman burst from a kaleidoscopic background of brightly colored geometric forms. 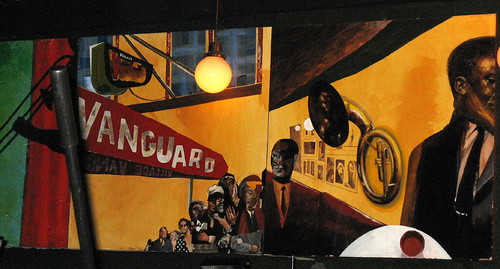 For more than 40 years musicians have gazed, perhaps with some puzzlement, at this visionary artwork, suggestive of birth, creative dynamism and human aspiration. Patrons seated on bar stools at the back of the club have come to think of the big, curved mural as a visual counterpart to the cascading notes drifting toward them from the stage.

Philip Stein, the artist who created the mural, and whose sister, Lorraine Gordon, runs the club, died at his home in Manhattan on April 27. Mr. Stein, a onetime assistant to the great Mexican muralist David Alfaro Siqueiros, was 90.

The origins of Mr. Steins mural are obscure. Painted on canvas, it has no title, although it has been referred to as New Man, New Woman. A date on the lower right-hand corner indicates that it was finished in 1968, part of a three-wall mural executed by Mr. Stein that dripping water from the buildings upper stories reduced to a one-wall mural.

Of the now-vanished panels, Mrs. Gordon hazily recalls a giant, languorous woman stretched the length of one wall, and a multifigure composition on the other. In any case, the two walls in question, after renovations at the club, are now covered with photographs of jazz notables, leaving Mr. Steins creation scene standing alone. (In 1996 it was joined by a mural on one of the side walls, painted by David Ellis.)

Max was constantly searching for something to put on the walls, Mrs. Gordon said, referring to her husband, who founded the Vanguard, and who died in 1989. So I think he approached Philip and got him to do this mural. Shes Mother Earth and hes a neer-do-well who doesnt come home at night. Its something like that. In a telephone interview, Mrs. Stein, somewhat more lyrically, called it the nucleus of life.

Kenny Washington, a drummer who has performed often at the club, said: All these years I never knew quite what it was. It looks kind of space age from the stage.