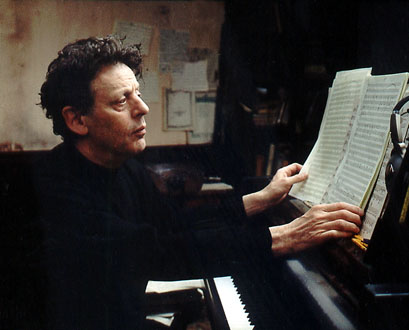 The musician made his name in, and shattered the mold of film music scores. By the 1980s, Philip Glass had earned a healthy reputation working in the concert hall, art films and the theater. That didn't mean he slid easily into Hollywood.

“When I first started doing Hollywood films," Glass, 72, said by phone from his home in New York, “I was told I wasn't writing real film music. I said, 'What is real film music?' And the person said, 'It means you don't remember the music.' “

“I said, 'That's such nonsense!' When you think of 'The Pink Panther,' what do you think of? Hank Mancini! With '2001' you think of Strauss -- the music goes right into your head! There are composers who can insinuate themselves into a film so you would not remember the film without the music."

Real or not, Glass' film music has helped make him perhaps the best-known classical composer of the last half-century. The three-time Academy Award nominee -- for “Kundun," “The Hours" and “Notes on a Scandal" -- will bring his Philip Glass Ensemble to the Hollywood Bowl on Thursday to perform several of his important cinematic and operatic pieces with the L.A. Philharmonic.

Glass' film music contrasts markedly with an earlier tradition of such composers as Erich Korngold and Bernard Herrmann: Rather than underscore or amplify a film's emotions, his music's tone remains strikingly neutral.

“It becomes a way of framing powerful imagery so you can have your own feelings about it -- at your own speed," said Robert Fink, a UCLA musicology professor and author of “Repeating Ourselves: American Minimal Music as Cultural Practice."

“He's said that older film music is manipulative, like a commercial, with the music telling you how to feel, like propaganda. He has remained true to a pretty avant-garde idea."

Glass came into film music in mid-career: He had already, with Terry Riley and Steve Reich, helped invent an American minimalism that grew out of the Western classical tradition and Indian music.

And he had already galvanized the art galleries, rock clubs and performance spaces of lower Manhattan with what he calls “music with repetitive structures," served as assistant to sculptor Richard Serra, and produced (with director Robert Wilson) the breakthrough non-narrative opera from 1976, “Einstein on the Beach."

But before film music became a central part of his career, the Baltimore-born Glass was still scrambling to hold things together financially. He formed, with Reich, the movers Chelsea Light Moving, and paid the bills before, during and after “Einstein" by driving a cab.

By the 1980s, his style established, he worked on increasingly large projects: Godfrey Reggio's “Koyaanisqatsi," an influential cult film; Paul Schrader's “Mishima," about the life and ritual suicide of Japanese novelist Yukio Mishima; and “The Thin Blue Line," the first of several films with eccentric documentarian Errol Morris.

“I had a lot to learn, and I learned it very quickly," Glass recalls. “The world of theater was the world I lived in -- not the world of the concert hall. So that made the entrance to film much easier, because I understood how things went together."

Glass has collaborated with more artists from more genres -- including David Byrne, Aphex Twin and Woody Allen -- than perhaps any composer in history. From the beginning, he's been conscious that his film scores need to fit another artist's vision.

“The question is: What is the function of the music?" he asks. “What is it doing for the film?"