SOURCE: ALL ABOUT JAZZ PUBLICITY
April 4, 2014
Sign in to view read count 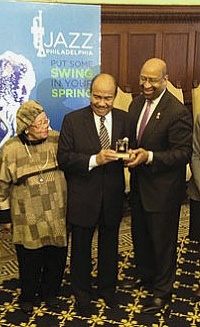 slideshow
In Philadelphia, and across the country, April is celebrated as Jazz Appreciation Month (JAM). To honor jazz as an original American art form, JAM was created in 2002 by John Edward Hasse, curator of the Smithsonian Institute National Museum of American History. Philadelphia has been one of the cities celebrating JAM for several years now, with the blessing and support of the Mayor’s Office of Arts, Culture and the Creative Economy as well as local jazz organizations and venues, notably the Philadelphia Jazz Project, Jazz Near You, the Philadelphia Clef Club Of Jazz, the Kimmel Center for the Performing Arts, the Jazz Bridge, the World Cafe Live - Philadelphia, Chris’ Jazz Cafe, the Gershman Y the John Coltrane Museum, and a host of others in the area.

This was the first year that Mayor Michael Nutter, a known jazz aficionado, hosted the kick-off press conference at his Reception Room in City Hall. His presence signaled increasing support for jazz in Philadelphia, support that is much needed in view of the decline of jazz venues and concerts in the city, which continues to be the home base of many of the world’s greatest jazz players and vocalists. Nutter knowledgeably touted some of the city’s greatest jazz heroes, saying. “We’re talking about John Coltrane, Dizzy Gillespie, Clifford Brown, Philly Joe Jones,” and adding that “Jazz is America’s most authentic and original musical gift to the arts.”

In honor of the occasion, Nutter gave an award replica of the Liberty Bell to legendary Philadelphia jazz saxophonist Benny Golson. Golson, in turn reminisced about his time with John Coltrane and others in North Philadelphia, mentioning a childhood flirtation with a lady named Thelma Anderson, who joined Golson at the lectern.

Margot Berg, Public Art Director, introduced the event and the mayor. The Francois Zayas Trio provided a musical prelude, including tunes composed by Philly musicians, concluding with a fine rendition of Golson’s “Whisper Not.”

The Philadelphia Jazz Project has organized dozens of events throughout the month of April at various venues around the city, including at the Kimmel Center, the Clef Club, the World Cafe Live, and the Woodmere Art Museum, culminating with a concert at City Hall on International Jazz Appreciation Day, April 30th.

A full list of Philadelphia’s Jazz Appreciation Month events are listed at philadelphia.jazznearyou.com.