SOURCE: MASTER OF A SMALL HOUSE
August 3, 2010
Sign in to view read count 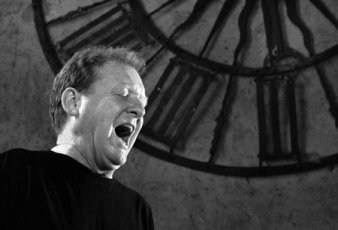 slideshow
Phil Minton's music practically mandates first person response. Burying the “I" in a review is a hard thing to do from the onset. Reaction to his work is frequently polemical with one person's vocal abuses occupying the same aural space as another's expansions. Minton doesn't appear to be especially bothered either way by potential controversy. His laconic liner notes on this third entry in his solo series endearingly lay out his up-to-the-minute reasoning: “I know things aren't getting better, but I hope this cheers you up a bit."

As with the earlier volumes, Minton leaves laryngeal censors and shackles at the figurative door. Thirty-seven “songs" zip by in just over fifty minutes, though their relative brevity doesn't necessarily lead to easy consumption. The collected sounds on many of the pieces superficially resemble a taxonomy of ethnic caricatures and speech impediments. The closer Minton comes to coherent speech, the less convincing and startling his creations. My favorite aspect is the array of imaginative imagery engendered by the sounds. The opener sounds like a prayer circle of asthmatic Gyuto monks. Title pieces “5" and “7" resemble the mush-mouthed mumblings of the Swedish Chef capped by Ricola-worthy yodels. “Para five" makes me think of Donald Duck's nephews Huey, Dewey and Louie, if throttled by piano wire. Self-inflicted strangulation factors into several other pieces.

Pure sound ventures are relatively few. The whirring drone on title piece “6" resembles wind gusting steadily through a ventilation pipe while “22" consists mainly of avuncular hums. “8" assembles a string of tea kettle whistles and screams. Minton's irrepressible humor bleeds through even on the more controlled pieces where he'll occasionally punctuate a concluding stretch of silence with one final gasp or sputter. “Vo be dayish" presents a Minton improvisation based on a Veryan Weston transcription of a Minton improvisation and curiously ends up the most conventionally “song-like" in structure. Weston also handles recording chores. The last piece, an improvised collection of strained sighs and eructation, layers in barbed political commentary with the admonition “i have given this much more thought than blair did when he decided to invade iraq."

Most of the tracks are ones I probably won't put in regular rotation, but my admiration for Minton's art remains steadfast. Many of his oral expulsions require extraordinary muscular and respiratory control. Last year's Blur is an easier sell as it features Minton's voice mixed with other instruments. This disc is for the truly brave souls able to embrace his improvisations sans such collaborative filters. One question though: what happened to those doughnuts?