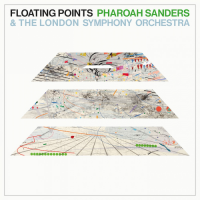 slideshow
Even when Pharoah Sanders plays up-tempo, he sounds as if he's playing a ballad. That's because the tenor saxophonist, known for his deeply spiritual approach, is always in a meditative state when creating. Sanders began playing jazz in 1961, when he moved to New York from Oakland, Calif. Born Farrell Sanders in Little Rock, Ark., he was urged in New York to use the name Pharoah instead of Ferrell by Sun Ra. Sanders followed the orchestra leader's advice and promptly began exploring the avant-garde. In 1965, Sanders joined John Coltrane's group and recorded on Coltrane's Ascension and Meditations. Some believe Coltrane's late abstract style was influenced by Sanders.

Artistically, Sanders has been on a life-long journey. His search for meaning has taken him through various global cultures as well as many different forms of music. His trip is less of a frustrating search to find himself than an odyssey borne out of curiosity. Unlike most jazz, which fits into formulas created by commercial need, Sanders' jazz is driven by a personal need to express his feelings and who he is. The result is a fascinating jazz form that's true to himself and his emotional compass.

The music is a fascinating voyage with Sanders at the helm. It's like canoeing on a tranquil river that winds through a dense forest of fragrant musical folliage. You listen and feel as if you're meditating. There are synthesizers coming and going, the bell sound of a celesta, strings and a wide range of repeated musical phrases. Atop it all is Sanders' saxophone, making statements with his overblowing technique or sitting out periods to allow the sparkling surface of electronica to rise. As you listen, the album acts as a blotter, draining you of stress and anxiety and freeing your ears to listen.

If this album makes you curious about Sanders, a good gateway into his discography is Karma, with its 33-minute The Creator Has a Master Plan. The song is hypnotic. Even Louis Armstrong recorded it on his last album. Then you can shift to Sanders' early years, checking out albums such as Pharoah's First (1964) and Tauhid (1966). Then check out Moon Child and any album with the word ballad in its title. From there, you'll be ready for whatever Sanders album you choose.

Here's an edit of The Creator Has a Master Plan recorded live in Germany in 1999...

And here's Louis Armstrong's recording of the song with Leon Thomas...