Petros Klampanis Blends the Colors of Emotion and Experience into a Rich Portrait of Humanity on his first Large Ensemble Album, "Chroma" 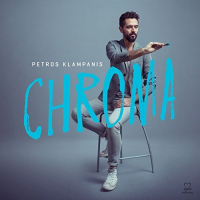 Recorded in association with The Onassis Foundation USA

Bassist/composer Petros Klampanis has absorbed a vibrant palette of colors over the course of a varied musical life journey, including Mediterranean and Balkan folk music of his native Greece, classical colorings of studies in Athens, Amsterdam and New York City, and vibrant splashes of musical pigment developed on the diverse NYC jazz scene through collaborations with such innovators as Greg Osby, Jean-Michel Pilc, Shai Maestro, Oded Tzur, Antonio Sanchez and Ari Hoenig.

On Chroma, his third album as a leader and Motéma Music debut, Klampanis explores the colors of human character, inspired by world events and personal experience. Chroma, the Greek word for “color,” masterfully employs a full spectrum of sonic colors to paint an introspective and emotionally daring artistic statement. His first large ensemble project melds the animated expressions of the composer’s jazz quintet (piano, bass, drums, guitar and percussion) complemented by lush, classically-arranged strings to create a near symphonic work of modern jazz.

“This project arose from a question,” Klampanis explains. “What are the elements that compose each one of us, our personal characters, our individuality? The first answer that came to my mind is that character is composed of all the emotions, the thoughts and ideas, the fantasies and experiences that we have in our lifetimes. If we were to assign each of these elements a single color, then every one of us could be seen as a unique composition of colors, the mix of which results in our own, very personal shade.”

Klampanis’ personal shade is a rich blend of colors whose expressive highlights have shined especially brightly during the making of this album. He explains that Chroma was born of a period of personal turmoil and self-examination. The end of a romantic relationship coincided with a number of other changes in the bassist’s life and in the world at large, leading, he says, to “an introspective period where I was spending time and energy thinking of the reasons that lead me, and other people, to make certain decisions, to think of what we think and to be who we are.”

Given his origins, Klampanis was also influenced by the turbulent events roiling the world, from economic stresses that hit particularly close to home in his native Greece, to his immigrant’s natural empathy for the refugee crises in Syria and across the Middle East. Processing these global events, Klampanis’ views on the human experience came into extreme clarity and were translated into Chroma as a riveting, synesthetic experience for listeners.

“We need to look inside and see what is really important for us and for the world around us,” Klampanis urges. “We happen to live during a strange time for humanity. Musicians and artists in general have historically been the ‘outsiders’ in most societies, and our time makes no exception. But art carries qualities that are essential for our development, individually and socially. We need more ‘color’ in our life: more love, more compassion, respect, and imagination.”

To achieve the striking tones on Chroma, Klampanis gathered a group of master musicians, each adding their own distinctive tint to the composer’s panorama: guitarist Gilad Hekselman and pianist Shai Maestro (both originally from Israel), drummer John Hadfield (a native of Missouri), and Japanese-born percussionist Keita Ogawa make up the core group, which is joined by an accomplished eight-piece string ensemble.

Chroma was recorded and filmed live before an intimate audience at New York’s Onassis Cultural Center. The Onassis Foundation USA, which is dedicated to exploring and promoting Greek culture from antiquity to today, provided a generous grant to support Klampanis’ work, which he developed over a series of live presentations in 2014 and 2015. “I thought that it was best to record to capture the energy that this band carries in front of an audience,” Klampanis explains, and indeed, the live setting is ideal for this well-honed ensemble, whose spontaneous interactions thrill, while never sacrificing the evocative sensitivity of Klampanis’ writing and arranging.

“I have invested a lot of energy, love and time for the creation of Chroma. I can confidently say that I am really satisfied with the way everything came together. I am also happy about my first collaboration with Motéma, a label which I admire and respect”.

The slow dawning of the title track provides a moving illustration of the concept of the album as a whole. A radiant image gradually comes into focus, beginning with the dream-like twinkling of Maestro’s piano, then the shimmering strings, then a gently assertive melody.

The brooding, noir-lit “Tough Decisions (Are Always Dark Green)” offers a hint of Klampanis’ particular brand of synesthesia, brought on by his recent break-up. While the bassist doesn’t actually see colors from music, he does associate emotions and experience with different hues. A personal crisis and its associated olive-green tones inspired this piece, while the wonderment of growing up in a small community and dreaming of bigger things (as Klampanis did on the Greek island of Zakynthos) is spotlighted on the azure-splashed “Little Blue Sun.”

A nebulous, mesmerizing intro leads into Hekselman’s “Cosmic Patience,” a piece that, for Klampanis, conjures not colors but an interstellar landscape. “Shadows,” written by his countryman, pianist Spyros Manesis, fits more easily into the overall concept, its overcast shades of gray expressing humanity’s struggle with our darker side. Klampanis reveals that interior dilemma through his tender, wordless vocals, achingly singing the melody accompanied by Hekselman’s piercing guitar. The album closes on a more optimistic note with the joyous, celebratory “Shades of Magenta,” its buoyant rhythms playfully countering the excited stabbing of the strings.

Born in Zakynthos, Greece, Petros Klampanis initially headed for a degree in mechanical engineering, dropped out of the Polytechnic School in Athens to pursue his musical passions, and in 2005 began double bass performance studies at the Amsterdam Conservatory. In 2008, he completed his formal studies at the Aaron Copland School of Music in New York, where he quickly began collaborating with some of the city’s most renowned jazz musicians. In addition to his extensive list of appearances as a leader locally, including the storied venues of Carnegie Hall and Lincoln Center, he has performed at the internationally acclaimed North Sea Jazz Festival and the Palatia Jazz Festival in Germany.

Klampanis’ collaborations with saxophonist Greg Osby led to the release of his first two acclaimed albums, Contextual and Minor Dispute, on the saxophonist’s Inner Circle Music label. Fellow bassist Drew Gress has praised Klampanis’ “aggressive melodicism, beautiful intonation, and uniquely personal string writing.” In 2012, Klampanis was invited by the Liepaja Symphony Orchestra for a series of concerts throughout Latvia, while his arrangement of the Greek folk song “Thalassaki” was performed by the Greek Public Symphonic Orchestra in Athens. Also an in-demand educator, Klampanis has given workshops internationally and serves as a guest lecturer at Oberlin Conservatory in Ohio and the Ionian Academy of Music in Greece.