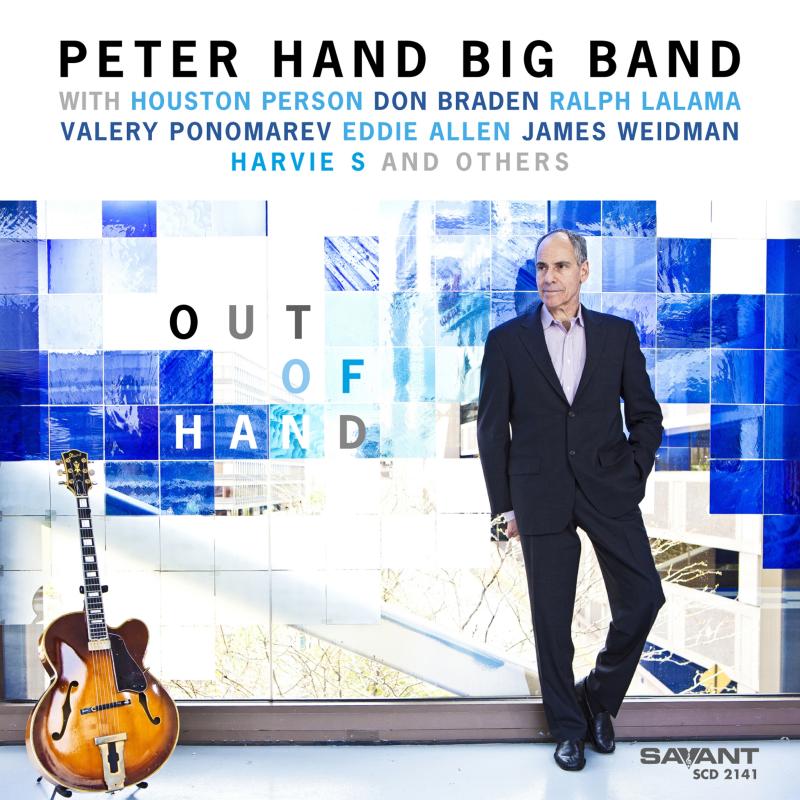 NEW YORK, NY—Out Of Hand, an ambitious new big band recording from guitarist, composer and arranger Peter Hand on Savant Records, his second for the label, will be released on September 23, 2014. Leading an outstanding group of jazz soloists in a program of original compositions and creative arrangements of standards, the album marks a new step forward in Hand’s career.

Hand began working on the music for Out Of Hand in the spring of 2013, and on two days in December the band recorded at Systems Two Recording in Brooklyn—one of the foremost studios for recording acoustic jazz and classical ensembles.

Out Of Hand, as Donald Elfman points out in the liner notes for the release, “is different in that it was recorded in a studio and that it includes a mix of standards and Hand originals, but the deftness of the writing and arranging and the expressive powers of the players as both soloists and ensemble members, are at the same high creative levels that were showcased in the earlier recording.” Houston Person appears as a special guest on the new album and plays with great spirit, depth and soul on three selections—an upbeat, swinging take on the pop tune “Sunny”, Hand’s brand new soul-jazz arrangement of Arlen’s “Blues In the Night” (with a knockout solo by Houston), and a new interpretation of Billy Strayhorn’s classic ballad “Day Dream”, which Peter was originally commissioned to write for Person’s appearance with the Jazz At Lincoln Center Orchestra.

Peter says, “I feel the song selection strikes a good balance with a variety of moods, rhythmic feels, and featured soloists.” There’s also a balance in Hand’s five original compositions—“Listen To Your Heart” is an attractive jazz waltz, “Out Of Print Blues” is an in-the-groove, medium tempo blues, “Barbara Rose” is a movingly lyrical ballad, “The Elevator” is an up-tempo “rhythm changes” composition in the spirit of Duke Ellington’s “Cotton Tail”, and “Night Echo” is an evocative, minor-key Latin jazz piece. Hand’s guitar work is heard to a greater extent on the new recording as well, contributing solos and fills, playing themes, comping behind soloists, and doubling melody lines with the horns.

To round out the program, Peter Hand has written an arrangement of Gershwin’s “Summertime” in 6/4 that immediately gives the song a different feel and groove. As Donald Elfman describes it, “Flute, clarinet, bass clarinet and muted brass create a new variety of colors in the orchestra, the song is re-harmonized and there’s a great deal going on but it all falls together in a natural, organic fashion.”

The remarkable musicians heard on Out Of Hand are also bandleaders and recording artists in their own right. Well-known to jazz fans, they have performed and recorded with many of the top icons in music, and their highly expressive, individual sounds and brilliant improvisations in this recording are a joy to hear. The brass section consists of trumpet masters Kevin Bryan (lead), Eddie Allen, Valery Ponomarev and John Bailey, and the trombonists are John Mosca (lead), Vincent Gardner and Jack Jeffers (bass trombone). The world-class saxophone section is Jay Brandford (lead alto and soprano, flute), Bruce Williams (alto), Don Braden (tenor, soprano and flute), Ralph Lalama (tenor, clarinet) and Kenny Berger (baritone, bass clarinet). The rhythm section providing the heart, beat and soul throughout is pianist James Weidman, bassist Harvie S, and drummer Steve Johns.

“Peter Hand has put together the kind of big band album that you don't hear much anymore—tuneful originals and standards arranged with verve and performed with perfection and flair, spiced with popping, swinging tutti sections and crackling solos." —Dr. Lewis Porter, jazz pianist, educator and author John Coltrane: His Life and Music

Out Of Hand by the Peter Hand Big Band on Savant Records will be available on September 23, 2014 at selected retail locations and at Amazon.com, iTunes and other major distributors.