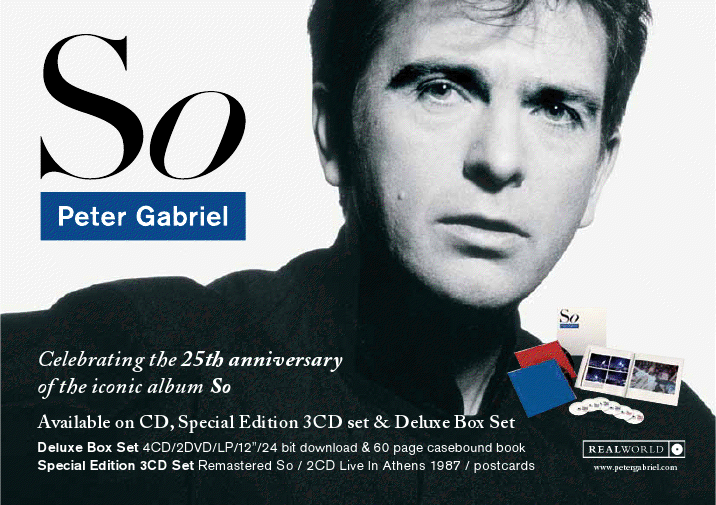 Peter Gabriel to Tour Across North America, Performing So in its Entirety

Hollywood, CA: One of the most successful and iconic music releases of the Eighties, Peter Gabriel’s 1986 album, So, has been digitally remastered for a special 25th Anniversary Edition to be released October 23rd (October 22nd internationally) by Real World Records/EMI in multiple physical and digital configurations. Peter Gabriel has confirmed a 16-date North American tour for September and October, with many of the musicians from his 1987 ‘So’ tour joining him to perform the album from start to finish, as well as other hits spanning his solo career.

Peter Gabriel’s So topped charts around the world, hitting Number 1 in the UK, Canada, Italy, and Holland and Number 2 in the US and Germany. So became a decade-defining album and the best-selling release of Gabriel’s solo career, landing an international array of multi-Platinum certifications, including quintuple-Platinum in the US with sales of more than five million copies.

Launched with the huge hit single “Sledgehammer” and its groundbreaking music video (which remains MTV’s most played video of all time), So also includes “In Your Eyes,” famously featured in Cameron Crowe’s film Say Anything, the haunting duet “Don’t Give Up,” performed with Kate Bush, and “Big Time,” Gabriel’s bombastic, tongue-in-cheek commentary on ‘80s extravagance. Co-produced by Gabriel and Daniel Lanois, the album also includes contributions from Laurie Anderson, Stewart Copeland, Jim Kerr, Bill Laswell, and Nile Rodgers.

So’s 25th Anniversary Edition will be available on CD and digitally, as well as in an expanded 3CD and digital Special Edition, which adds a previously unreleased 1987 Athens concert recording from Gabriel’s “So" tour, and as a 4CD/2DVD/LP/12” Deluxe, Limited Edition box set.

The box set includes the remastered album on CD and on 180-gram vinyl which has been mastered at half speed to maximize the audio quality and re-sequenced so the tracklist, unlike that of the original LP, is as Peter Gabriel had originally envisioned. The set also features a bounty of previously unreleased audio and video content, including the two Athens concert CDs and a So DNA CD of work-in-progress drafts of So’s songs, mapping the album’s evolution from concept to completion.

One of the box set’s two DVDs features the fully restored Athens concert, which was filmed and recorded by director Michael Chapman and executive produced by Martin Scorsese. Gabriel’s first concert to be filmed, the footage has been assembled for the first time from more than 150 reels of original 35mm negatives and its audio has been mixed in 5.1 surround. The box set’s second DVD features a new ‘So: Classic Album’ documentary. The latest addition to the acclaimed and award-winning “Classic Album" series tells the story behind the making of the album and its music videos, with contributions from many of those involved, including interviews with Gabriel and Lanois, among others.

The box set also includes a 12-inch double A-side vinyl single with two previously unreleased tracks from the So sessions, “Courage” and “Sangrada,” plus an alternate version of “Don’t Give Up” (Piano and Bvox Mix). A 60-page case-bound book with an introduction and So DNA summary written by Peter Gabriel, new liner notes, and an extensive collection of rare and never before seen photographs completes the set.

CD 1 - Original album, remastered (tracklist above)
CDs 2 & 3 – ‘Live In Athens 1987’:
This Is The Picture (Excellent Birds)
San Jacinto
Shock The Monkey
Family Snapshot
Intruder
Games Without Frontiers
No Self Control
Mercy Street
The Family And The Fishing Net
Don’t Give Up
Solsbury Hill
Lay Your Hands On Me
Sledgehammer
Here Comes The Flood
In Your Eyes
Biko

Peter Gabriel first came to international prominence with the success of Genesis, a band he co-founded while still at school. Since leaving Genesis in 1975, his recording career has included seven studio albums, acclaimed film soundtracks for Birdy, The Last Temptation of Christ, and Rabbit Proof Fence, as well as live and compilation albums.

His wider musical career has included multiple GRAMMY Awards (16) and the creation of the now global WOMAD festival.

Peter Gabriel co-founded the human rights organization Witness.org in 1989 and in 2007, Peter Gabriel and Sir Richard Branson founded Elders.org which was launched by Nelson Mandela. In 2006 Peter Gabriel was awarded the prestigious Man of Peace title by The Nobel Peace Laureates. He has also engaged in a wide variety of tech-based businesses throughout a variety of creative industries.