SOURCE: ALL ABOUT JAZZ PUBLICITY
September 11, 2009
Sign in to view read count 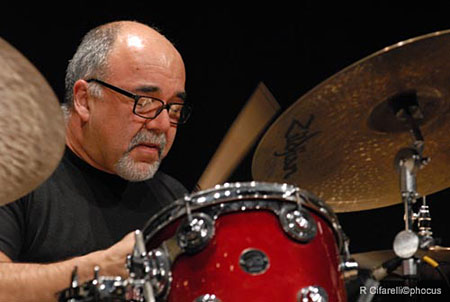 Peter Erskine began playing the drums at the age of four, and has now been at the forefront of world-class jazz ensembles for thirty years. Erskine’s first major professional work was with the Stan Kenton Orchestra, which he joined in 1972. After a three-year stint with Kenton and a two year stay with Maynard Ferguson, he joined Weather Report in 1978. The excellence of the partnership between Erskine and bassist Jaco Pastorius was an integral part of that group's success.

Alan Pasqua, Chair of Jazz Studies at USC, was born in New Jersey and began studying piano at the age of seven, playing both classical and jazz. His career in L.A. broadened as he started playing with more rock and pop artists. He has performed in the bands of Eddie Money, Bob Dylan, and Santana. Some of his other album and touring credits include: Ray Charles, Joe Cocker, Ry Cooder, John Fogerty, Aretha Franklin, Sammy Hagar, Al Jarreau, Elton John, Queen Latifa, Graham Nash, Bob Seger, Rod Stewart, The Temptations, Joe Walsh, Dionne Warwick and Burt Bacharach. In the late 1980s, Pasqua teamed up with guitarist Dann Huff to form the rock band Giant. Their debut recording, Last of The Runaways, on A&M Records, contained several songs written by Pasqua, including the hit single, “I’ll See You In My Dreams.” In addition, he has worked with composers John Williams, Quincy Jones, Dave Grusin, Jerry Goldsmith, Henry Mancini and Maurice Jarre on motion picture soundtracks. He is recognized as the co-composer of the “CBS Evening News Theme”, which has been airing nightly since 1987. Also, he composed the soundtrack for Disney’s hit movie, The Waterboy, starring Adam Sandler. Pasqua is no stranger to the jazz world, and is a highly regarded pianist and composer. His two CD releases, Milagro and Dedications on the Postcards Label hit the top of the jazz charts. All-stars Jack Dejohnette, Paul Motion, Dave Holland, Michael Brecker and Randy Brecker are featured on these recordings. In addition, Pasqua has played and recorded with the likes of Joe Henderson, Stanley Clarke, Gary Burton, James Moody, Gary Peacock, Gary Bartz, Eddie Daniels, Dave Weckl, Tom Scott, Peter Erskine, John Patitucci, Reggie Workman, The Thad Jones/Mel Lewis Jazz Orchestra, Sam Rivers, Sheila Jordan, Joe Williams, Ivan Lins, Frank Foster, Alphonso Johnson, Narada Michael Walden, Les McCann, Stan Kenton and Don Ellis. He is also known for his contribution to jazz education, with a recently published books, “The Diminished Cycle” and “The Architecture of Music”. Pasqua has also been a co-leader of a trio with the legendary drummer Peter Erskine. The trio has released “Live At Rocco” and “Badlands”, both on the Fuzzy Music label. Both recordings have received critical acclaim. “Body and Soul”, a trio recording of his with Darek Oles, bass, and Peter Erskine, drums, followed as a Japanese release on the VideoArts label. Recently, Alan has teamed up with his former Tony Williams Lifetime band mate Allan Holdsworth, and is co-leading a quartet that will feature Jimmy Haslip and Chad Wackerman. The band will revisit some of the original Tony Williams Lifetime material as well as play some new compositions. A live HD DVD recording, “Live at Yoshi’s” was released in the spring of 2007. Pasqua’s follow up release as a leader was entitled, “My New Old Friend“, on the Crytogramaphone label. The recording reached #15 on the National Jazz Charts, and has received much critical acclaim. This CD also features Peter Erskine and Darek Oles. Some new original compositions by Alan are included on this recording, most notably, “Highway 14“, which Kurt Elling recorded on his recent Concord release, “Nightmoves”. A brand new electric band recording, “The Anti-Social Club”, Cryptogramophone, was released in the Fall of 2007. This CD features Nels Cline on guitar, Jimmy Haslip on bass, Alex Acuna playing percussion, Scott Amendola on drums, Jeff Ellwood on saxophones and Ambrose Akinmusire on trumpet. In 2008, Pasqua joined forces once again with Peter Erskine and Dave Carpenter, arranging, co-producing and playing on the Grammy Award nominated trio album “Standards”.