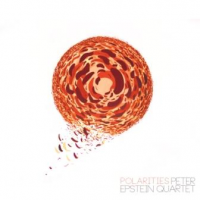 slideshow
Polarities, the New Album from the Peter Epstein Quartet, Will be Released on May 13

“...a wonderfully compelling and gripping album, on which instruments and sounds are of a rare expressive power." - Stef Gijssels, Free Jazz Blog, reviewing Epstein's previous release as a leader, Abstract Realism

Saxophonist Peter Epstein may have slipped from public view a bit since leaving New York to take up a teaching position at the University of Nevada, Reno (where he is now the director of the Jazz Studies program). He hasn't been touring a lot these last years. But his 2005 Songlines release, Lingua Franca, was a beautiful jazz-world collaboration with guitarist Brad Shepik, and last year his playing on Cedar Wisely, his former student Chris Clark's Songlines debut, showed he had lost none of his improvisational balance and fire. Now comes his new quartet - “new" in the sense that this particular grouping of musicians had not played together before, but definitely not new in terms of shared experience as well as shared conceptual/aesthetic views of the music: “I have 25 years of history with Ralph, 20 with Mark, and 15 with Sam...The music that we've all played together has consistently been music that is intimate and personal, and more about the individual people one is playing with than simply having a given instrument competently 'covered'. In my mind, in my ear, I simply hear these guys playing when music 'plays' in my head."

“These guys" are the Peter Epstein Quartet - Ralph Alessi on trumpet and cornet, Sam Minaie on bass, and Mark Ferber on drums - which will release the result of their debut collaboration, Polarities, on May 13.

It's not surprising then that this record feels so cohesive and lived- in: even though the quartet has only performed a couple of times, there's a nuanced clarity of communication, a focus and immediacy that only comes with what Peter describes as “such a relaxed but total commitment to the music, to each other, and to the moment at hand ...Everyone is more than capable of taking advantage of whatever opportunities arise within the music, and of doing so with grace and artistry." Epstein's compositions range from primarily quiet, introspective pieces like “Polarity" to more intense, up-tempo numbers like “Hurtle" and “Constance" and the mid-tempo “Email from Nigeria", a 10/8 tune that perhaps hearkens back to his deep engagement with Ewe drumming as a student at CalArts in the 90s.He has a knack for writing interesting melodies and pieces with contrasting sections or ambiguous moods, but sees the written material as almost secondary. “I've learned from experience that it's best to avoid arriving with too much of a preconceived idea of how something should sound. I tend to want to write things that are more simple and elemental, then let the performers use the existing compositional material as a starting point but one that necessarily needs their input. [The tunes] need life and vibe and interpretation breathed into them by the collaborators that I rely on so heavily."

That collaboration produces a mercurial, hard-to-pin-down, highly internalized synthesis of many strands of jazz history and influences from outside the music (for example, the mathematically vertiginous metrical subdivisions of South Indian classical music, another music Peter has studied). And it might be partly the instrumentation, but there also seems to be a kind of spiritual connection, if not a close stylistic one, with Ornette's classic quartet with Don Cherry. “That's interesting because there was a time when I thought about Ornette's music a great deal. Same with Coltrane, Miles, Wayne, Frisell, Threadgill, Steve Coleman, etc. My listening habits over the last several years have veered towards older historical stuff that I missed or passed over when I was first coming up. I've been listening to a lot of Johnny Hodges, Coleman Hawkins, and Benny Goodman, revisiting standards, etc....Lately I find that I spend most of my time trying not to think too much about influences. I don't know that I'm necessarily trying to avoid obvious influences or previous modes of playing and/or writing, but perhaps I'm trying to not-think-about-it- too-much so that whatever is there will emerge organically and not due to any sense of what should be there, or what folks might like, or any number of other extra-musical considerations. I've become increasingly committed to the goal of simply being honest musically. That sounds so obvious, and something I'm sure we all strive for, but in truth, it is very challenging and can be a bit scary."

And that voice expresses itself equally on his two horns, which “are quite different from one another. In general, the soprano feels a bit more lyrical, and a bit more gentle, while the alto is a bit heavier and more raucous. That said, certain tunes just seem to 'want' to be on soprano, others 'want' alto. And I sometimes reallyenjoy switching that up!"

Saxophonist Peter Epstein began his career in 1984 in Portland, Oregon. After several years apprenticing with many of the region's top jazz artists, he relocated to Los Angeles to study jazz and various world music genres at California Institute of the Arts. After receiving his BFA from CalArts in 1992, he moved to Brooklyn,and has since appeared on over 40 recordings and has toured in more than 20 countries with artists including Brad Shepik, Ralph Alessi,Bobby Previte, James Carney, Joao Paulo, Jim Black, Scott Colley Ravi Coltrane, Medeski, Martin, & Wood, Peter Erskine, and many others.

Epstein has recorded six previous albums as a leader: Staring At the Sun, The Invisible, Solus, and Old School for the Japanese audiophile label MA Recordings; Lingua Franca for Songlines Recordings; and most recently, Absolute Realism for Origin Records.

He is a founding member of the School for Improvisational Music in New York City. After receiving his Master of Music Degree in Saxophone Performance from the University of Nevada, Reno in 2004, he joined the UN faculty, and now serves as the Director of Jazz & Improvisational Music. Epstein is a member of the UNR Jazz Studies faculty ensemble, The Collective, and has appeared with the Reno Philharmonic Orchestra, Reno Chamber Orchestra, and Reno Jazz Orchestra.