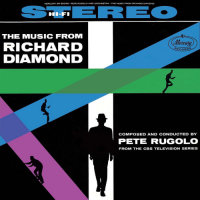 Arranger Pete Rugolo is an acquired taste. Listening to virtually all of his leadership albums in the 1950s and early '60s yesterday, I initially dismissed many of them as bombastic, elephantine works that relied too often on shrill trumpets and tympani drums. What's more, many of the albums featured a stray clunker so bad that they made me question Rugolo's taste and judgment.

That was my first listen. By the third go-through, I was in a state of bliss, surprised that the albums he recorded under his own name have held up so well. What changed? Acclimation to Rugolo's orchestral language and appreciation for instrumental textures. Which just proves that the more you listen to Rugolo's leadership albums, the more they grow on you. The sound is like riding in a massive car from the 1950s. There's a bigness at every turn and nothing is small. There's also a charm to the dramatic sound that seems as if it would be most at home on a CD player while driving around Los Angeles today.

From Introducing Pete Rugolo and His Orchestra, his first leadership LP recorded in February 1954, to TV's Top Themes from February 1962, Rugolo's arrangements maximized every corner of his orchestras, which always featured the cream of the West Coast studio jazz scene. In 1954, Rugolo recorded Adventure in Rhythm and Rugolomania. His charts for You Stepped Out of a Dream, California Melodies, 360 Special, Rugolo Meets Shearing and 4:30 A.M. are brash, daring and nothing short of spectacular.

By 1956, Rugolo began a series of Hi-Fi albums that were arranged wide to take advantage of the new and wider spectrum of sound on LPs that exploited home phonograph speakers. These included For Hi-Fi Bugs, Reeds in Hi-Fi, Brass in Hi-Fi and Percussion at Work. Choice cuts here are Theme for Alto; Interlude; Sunday, Monday or Always; Godchild; My Mothere's Eyes and Brass at Work.

In 1959, Rugolo scored the music for the Richard Diamond TV detective series. Songs such as All Star, The Sleeve Job and The Teaser are priceless. The results, along with Henry Mancini's Peter Gunn (1958-1961), are among the finest expressions of “crime jazz."

And then came the introduction of stereo in 1958. Rugolo set to work on a series of albums that took advantage of the new format, with different sections of the orchestra isolated in one speaker or the other. This series for Mercury included 10 Trombones Like 2 Pianos (1960), 10 Trumpets and 2 Guitars (1961) and 10 Saxophones and 2 Basses (1961). The songs Love Is Just Around the Corner and Angel Eyes are hip, refashioned arrangements from Rugolo's Four Freshmen and Five Trombones album in 1955. Struttin' with Some Barbecue, Guitarsville, Skyliner, Sometimes I'm Happy and, most of all, Holiday for Strings, are sensational.

As I said, you have to ease into Rugolo. At first the music may seem a bit jumpy, jarring and circus-like. But the more you listen, the more you realize Rulgolo's genius for action-packed arraning and colorful instrumental collisions. While I could do without the novelty songs, such as Saxophobia, they're a small price to pay for the vast majority of swinging fireworks. The weird part is I'm now sort of addicted to Rugolo's wide-body sound and can't wait to resume my listening today.

JazzWax tracks: You'll many of the recordings mentioned above on Fresh Sound's Adventures in Jazz (here), Adventures in Sound (here) and Exploring New Sounds (here), which includes the stereo albums. The rest you can cherry-pick out of Amazon or iTunes. A bunch are also available for a free listen at Spotify.

JazzWax clips: Here are six amazing arrangements by Pete Rugolo. I must say, these sound particularly great cranked up:

Here's You Stepped Out of a Dream, an adorned instrumental arrangement Rugolo first wrote for Nat King Cole in 1952...

Here's Brass at Work (with Don Fagerquist and Andre Previn)...

And here's Holiday for Strings...