With the LetterOne RISING STARS Jazz Award, a tour across the U.S. and Canada, and a new record in the works, Sasha Berliner is poised to be one of modern-day jazz’s most promising up-and-comers. 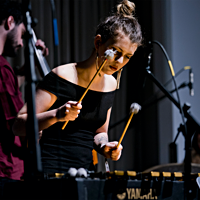 slideshow
The jazz scene has a new rising star, and she’s a vibraphonist. Sasha Berliner, a 20-year-old musician, composer, producer and bandleader from San Francisco, won the LetterOne RISING STARS Jazz Award, an annual competition that offers up-and-coming jazz musicians an opportunity to make a name for themselves.

“We were very impressed by the quality of the group of artists who were in the final round of voting and it was not easy to come to a decision about the winner,” said the jury that selected Berliner as the winner of the award. “Berliner convinced us with her musicality and dedication, but also that she is pushing the jazz envelope forward. We are convinced that we will hear a lot from her in the future.”

Berliner started playing drums at age eight, picked up the vibraphone at age 13, and is now an alumna of the SF Jazz High School All-Stars Orchestra and the Banff International Workshop in Jazz and Creative Music. She is currently a student of The New School of Jazz and Contemporary Music in New York. Her next album, Azalea, is scheduled to be released in September 2019.

With the LetterOne RISING STARS Jazz Award, a tour across the U.S. and Canada, and a new record in the works, Berliner is poised to be one of modern-day jazz’s most promising up-and-comers.