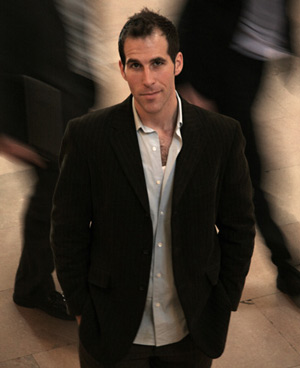 Marcus comes to Iridium after an exciting build up of events, including his Pre-Release Party which was held at the Jo Malone Flagship Store in the Flatiron Building and his Official CD Release Party which was held at Catch-22. Both special events included a fun-filled evening of live performances, chocolate delicacies by Holistic Living Now, Champagne tastings and much more.

Though Marcus has graced the stage at Iridium in the past to perform alongside the legendary jazz guitarist, Les Paul, this upcoming concert will serve as Marcus’ first headlining show in the space. Iridium is known not only for its amazing sound, but also for its live recordings and its attractive setting. Critics from New York Magazine and The New York Times have labeled Iridium as “the best Jazz venue in the city.”

Take Me Anywhere is the second album released on Marcus’ label, Fallen Apple Records. Here, Marcus is introduced as a songwriter with seven original songs including “Take Me,” “A Walk,” and “A Felony Called Love,” accompanied by 10 exciting and fresh arrangements of tasty standards such as “No Moon At All,” “I Fall In Love Too Easily,” “A Lovely Way To Spend An Evening,” and “Look For The Silver Lining.”

Already, the album has received rave reviews from People Magazine, Jazz Times, Jazz Improv, Midwest Record, Jazz Chicago, Jazz Weekly, eJazzNews, and Jazziz Magazine. JazzReview.com’s Susan Frances says, “Goldhaber has the refined stylizing of Michael Feinstein with an elegiac glide reflective of Cole Porter. Each track is as poetic as a Shakespearean sonnet and creates an intimate setting between the listener and Goldhaber.” She further refers to Marcus as an “incurable romantic,” noting that “his vocals linger on the moments of joy, and ache to be there when they aren’t.”

When asked about the immediate success and positive feedback on the release of the new record, Marcus replied, “I’m really thrilled that folks are connecting with my music, that’s what it is all about for me.”