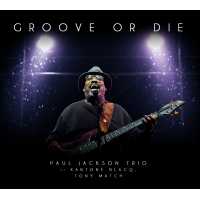 slideshow
“This is the first recording of the Paul Jackson Trio; it is something old and something new, and everything that I love to play. I’m playing with excellent musicians that are like my family and I hope everyone can enjoy this music as much as I do playing it. Love to you all!” —Paul Jackson

Bassist, vocalist, composer, arranger, producer and educator Paul Jackson is known as the “Musician’s Musician”. As a founding member of the Headhunters under Herbie Hancock, Paul’s creative output has shaped a sound that launched a new direction in contemporary music. He is one of the world’s most important and influential electric bassists– and certainly one of the most studied and copied– with generations of bass players around the globe inspired by his signature and infectious grooves.

After years of touring the globe and performing with the likes of Hancock, Stevie Wonder, George Benson, Chick Corea and countless other visionaries, Jackson has assembled his new trio featuring the multi-instrumentalist Xantoné Blacq and first-call drummer Tony Match. The Paul Jackson Trio have been touring to sold-out audiences at festivals and top clubs in Asia and Europe of late (some tours featuring special guests Randy Brecker and Pee Wee Ellis) and have excitedly developed a new repertoire of Paul’s music that has been recorded in London at WAX Studios in April.

“I am super happy with my new trio. When we’re improvising I get the same feeling that I felt when playing with Herbie and The Headhunters. This band has everything I need. To add extra excitement, I am looking forward to featuring special guests who will play with our fine rhythm section.” —Paul Jackson

Michael Janisch, WWR owner, bassist and life-long fan of Mr. Jackson says of the signing. “Paul Jackson is one of my very top heroes on electric bass. I started playing at 10 years of age and luckily for me my music teacher gave me the album Thrust by Herbie Hancock later in my teens, and it blew my mind. I still play&#151and teach my students—the bass lines from this album today. His feel is otherworldly, as if he’s singing right through his instrument, both when comping and soloing. And his groove cuts right to your bone; it’s something that cannot be taught. The way he interacts with the band while holding it down set the highest bar for all electric bassists and to my ears very few have attained this level ever since. I have always aspired to touch this greatness and I’m literally over the moon about this new signing. I met Paul for the fist time at his show in London a few months back at Ronnie Scotts, which in itself for me was a dream come true, especially as he allowed me to play on his bass! And I’m pinching myself to know that I’m going to be working with him on his new project and releasing the finished result on my label. It’s also great to see WWR continue to branch out musically which is what I’ve always intended.”