Paul Hemmings has mastered the uncommon and highly compelling art of jazz ukulele. 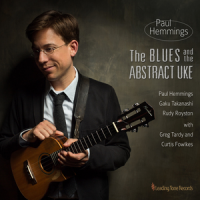 Paul Hemmings has mastered the uncommon and highly compelling art of jazz ukulele. On The Blues and the Abstract Uke (the title clearly a nod to the great Oliver Nelson), Hemmings reveals a richness of harmony, a bell-like tone and a deep, unforced sense of swing that many will not expect from the small four-stringed instrument. In Hemmings’ hands, and with the unfaltering musical support of bassist Gaku Takanashi and drummer Rudy Royston, the ukulele bursts forth in the mix, full of warmth, expression and technical depth.

On several cuts, trombonist Curtis Fowlkes and tenor saxophonist Greg Tardy expand the lineup and heighten the energy, bringing Hemmings’ artistic concept to another level. “The idea for this record was to explore some of the many different shades of the blues,” Hemmings remarks.

California-bred and New York-based, Hemmings debuted his ukulele- fronted trio on record with 2011’s Introducing... The Paul Hemmings Uketet. Prior to that, he’d made his name as a guitarist, releasing three varied trio outings: Letter from America (2007); featuring tenor legend John Tchicai; Sgt. Pepper’s Lonely Hearts Club Band (Live!), a reimagining of the landmark Beatles album which included his first appearance on ukulele (2006); and In & Out (2003), with the formidable Eric Alexander on several tracks.

“The transition from guitar was interesting, for sure,” Hemmings says. “For the first couple of years I was relating everything back to guitar. But at some point everything clicked and the ukulele became its own thing in my mind. I could start to approach it without having to transpose everything. Beyond the tuning, there are a lot of techniques that I’d only flirted with on the guitar that are more suited to the uke. I also don’t use a pick on ukulele, so I had to focus a lot more on fingerpicking and using my thumb. I gained a whole new appreciation for Wes Montgomery.” It’s fitting for Montgomery to be represented here with his classic “West Coast Blues.”

What speaks to Hemmings most about the ukulele is its timbre. “I just love that bright, organic, warm, and focused sound you can get out of a good ukulele, and that has everything to do with why I’ve chosen to focus my music around it recently. I also really like the fact that the instrument has such a limited range. Some people look on that as a limitation but I feel like it’s forced me to be more creative in terms of doing more with less, which I think has helped me get closer to the elusive goal of finding my own sound.”

Takanashi is heard on acoustic bass but also (on two tracks) the beautiful and richly voiced ukulele bass, or uBass. “Gaku has been there since the beginning of this whole ukulele experiment and was very supportive from the outset,” Hemmings says. “Apart from a great feel, he brings a very open mind and sense of playfulness to the table. He got pretty into the ukulele thing too, so we ended up getting him a deal through Kala Ukuleles.”

Rudy Royston, a noted bandleader in his own right, with sideman credits from Dave Douglas and JD Allen to Rudresh Mahanthappa, “brings his incendiary touch, a very deep groove, and an almost telepathic degree of interplay to the group,” Hemmings says. “Gaku had done some gigs with Rudy in New Jersey so he introduced us. I first saw Rudy playing with Bill Frisell’s Beautiful Dreamers trio at the Vanguard and was totally knocked out. Playing with him has been an amazing experience.”

Hemmings’ guests, too, play an indispensable role. “Curtis is so warm, both as a person and as a player,” Hemmings says, “so I knew he would be the perfect addition. Greg is fantastic — I love the soulful, spiritual thing he brings with him. It reminds me of Tchicai in a sense, but it’s unique to Greg.”

While every piece on The Blues and The Abstract Uke is in fact a blues, Hemmings notes, “none of them are straight I-IV-V, 12-bar blues. Even ‘Folsom Prison Blues’ is an 11-bar form, the way Johnny Cash wrote it. My earliest musical influences were all rooted in the blues. My father played mostly fingerstyle blues guitar and he introduced me to the basics. Between that and his record collection I developed a real appreciation for the blues from the start. But the blues represents more of a philosophy to me than it does a genre or style of music. Heartache and misery are of course an inevitable part of life, but the blues to me is about learning to channel that pain and create something positive out of it.”

In addition to blues standards associated with Bessie Smith, Howlin’ Wolf and others, Hemmings delves into the jazz canon with the Montgomery tune as well as Jim Hall’s 16- bar gem “Careful.” Hemmings’ own “Study Hall,” a swinging minor blues, is a tribute to Hall as well: “Jim Hall helped me fall in love with dissonance. All those tight intervals and colorful voicings. I wrote ‘Study Hall’ a few months before he died. It’s harmonized mostly in fourths, that’s what Greg and Curtis are playing. The title is meant as good advice for students of any stringed instrument.”

“The Boogaloo Sensei of East 78th Street” refers directly to Takanashi. “I wrote that one for him,” Hemmings reveals. “Gaku loves a good boogaloo.” The dark and mournful “Goodbye Lentil” is immediately followed by its companion piece, “Hello Bean,” a New Orleans second-line celebration of the birth of Hemmings’ son. “You can hear his heartbeat, recorded from one of his sonograms, at the end of the track,” Hemmings says.

Hemmings was born in Huntington Beach, CA, to parents who had emigrated from England. While attending the University of California-Davis he met veteran improviser John Tchicai and began playing in a Tchicai-led ensemble, which he describes as “a life-altering experience.” Immediately after college he left for New York and began working with drummer and veteran Harlem bebopper George Reed. Hemmings also attended the New School Jazz and Contemporary Music program, graduating in 2005.

Along with performing and recording, Hemmings is busily involved in what he calls “the current worldwide ukulele revolution,” taking part in festivals, leading workshops and becoming known as the “mad professor” of ukulele instruction. He is currently at work on a series of books and video tutorials for ukulele players of all stripes.