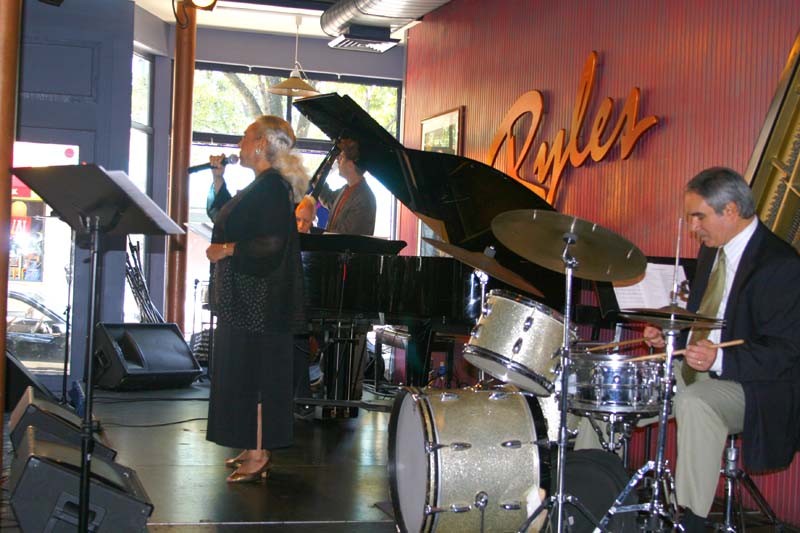 Paul Broadnax and his trio have been entertaining Boston audiences for decades. His warm demeanor and crooning style are the perfect accompaniment to an evening 'out'. Likewise, Patricia Adams commutes to Massachusetts from her New York home to play Ryles brunch first Sundays and for special events such as she and Paul plan for June 12th. After visiting each other's gigs, Broadnax and Adams decided it would be fun to team up for an evening of duets.

Ryles Jazz Club offers full service dining with some of the best to-die-for ribs on the east coast. Dinner at Ryles promises deliciously seasoned specialties from Chef Mitch's kitchen - - dinner and a show in the style of caf society.

There is a $10 cover charge at the door. Tickets may be purchased in advance by going to rylesjazz.com and clicking on BUY-TIX. Ryles Jazz Club is wheelchair accessible. All major credit cards are accepted.

Paul has produced several CDs and been a featured artist as well. His beautiful piano touch and intimate singing style can be enjoyed live Sundays at the Acton Jazz Caf (noon to 3:00 pm) and Top Of The Hub (8:00 pm to midnight).

Known for his “King Thing" (Nat Cole's singing and playing), and the powerful influence of Joe Williams, he continues to perform around New England and beyond. He has been twice nominated for the Boston Music Awards Jazz Singer of the Year, and chosen in 2003 as Musician of the Year by the Boston Musicians' Association.

* * * * Patricia Adams, vocalist, sings and swings jazz and blues standards from Tin Pan Alley and Harlem renaissance among New England venues. Stepping onto a nightclub stage for the first time in 1992 at Scullers Jazz Club in Boston, Adams traded her thirty-five year career in human resources management for life as a full time artist in 1998.

“How can a woman with this many years in middle management sound so warm and personable, and even a bit like Lena Horne?" muses the Boston Globe, 2004.

Adams brings her 35 years corporate experience to Berklee College of Music in Boston with a business jazz jam for the entrepreneurial musician, Bandleader Toolkit. You can hear The Patricia Adams Quartet at Ryles Jazz Club, 10:00 am to 3:00 pm, first Sundays.

Peter Kontrimas [bass] is one of New England's most revered sound engineers and bassists. He has played bass with The Paul Broadnax Trio for many years, enjoying tenured gigs at upscale venues. He is a much sought after bass player, particularly in the Boston area.

“Peter Kontrimas' bass makes some telling appearances, including a thoughtful solo on “You Won't Forget Me." ~ Dave Nathan, All Music Guide. Kontrimas has recorded and/or played on over 254 recordings.

Drummer, Gary Johnson, has been keeping time for 37 years with, among others Scott Hamilton, Dave McKenna, Ken Peplowski, Keely Smith and the Nelson Riddle Orchestra.

For four years, he traveled extensively with the Artie Shaw Orchestra under the direction of Dick Johnson. While touring, he accompanied artists such as Buddy DeFranco, Dizzy Gillespie, Rosemary Clooney, Frankie Laine. Helen Forest, Connie Haines and Ruby Braff. Currently, Johnson freelances in the New England area, including playing every month with The Ray Santisi Trio at Ryles Jazz Club.

Johnson studied with Bill Flanagan, Fred Buda of the Boston Pops and Alan Dawson. He attended the Berklee College of Music.