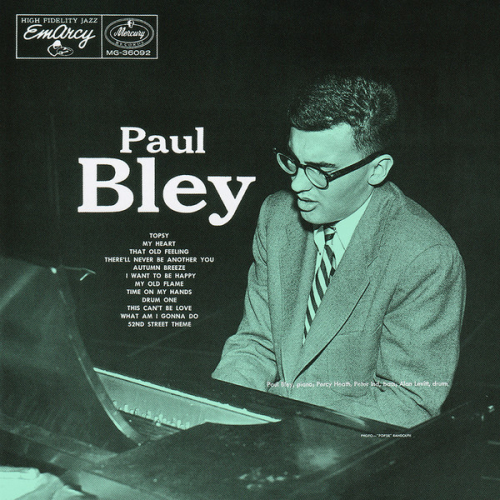 slideshow
Pianist Paul Bley is often thought of today as a free-jazz trailblazer and avatar of the avant-garde. But in the beginning, in the early 1950s, Bley was a swinging modernist, leaning heavily on bop. Bley led a trio in New York and recorded three albums—Introducing Paul Bley (Debut), Autobiography in Jazz (Debut) and Paul Bley (Emarcy).

The two 10-inch albums for Charles Mingus's Debut label were recorded in November 1953 and featured Bley (p), Mingus (b) and Art Blakey (d). The songs on the first were Opus One, Teapot (also known as Walkin'), Like Someone in Love, Spontaneous Combustion, Split Kick and I Can't Get Started.

The second Debut release featured Santa Claus Is Coming to Town, Opus One (alternate take), This Time the Dream's on Me, Zootcase and Theme.

Paul Bley on Emarcy in February and August 1954 featured Paul Bley (p), Percy Heath (b) and Al Levitt (d). The songs were Autumn Breeze, Drum One, 52nd Street Theme, Topsy, My Heart, That Old Feeling and There Will Never Be Another You.

Three days later in August, bassist Peter Ind replaced Heath. They recorded My Old Flame, I Want to Be Happy, Time on My Hands, This Can't Be Love, My One and Only and Willow Weep for Me.

According to the July 1955 Down Beat magazine, Bley was already thinking about the avant-garde, expressing a desire to write longer originals “without a chordal center." In 1956, Bley's trio with bassist Hal Gaylor and drummer Lennie McBrowne toured the U.S. with a brief gig in Mexico. The last stop was a New Year's Eve party at the Palm Springs home of Lucile Ball and Desi Arnez.

During the gig, Bley collapsed with a bleeding ulcer. Ball took Bley to the hospital and reportedly paid for his care. Karen Borg, the cigarette girl Bley met at New York's Birdland earlier that year, flew out to meet him in L.A. They married and she became pianist-composer Carla Bley.

The early trio recordings of Bley's are interesting. They are straight up, but there are early energetic rumblings that would give way to more experimental music later in the decade. And his bop solos were solid and lyrical, particularly on I Want to Be Happy and Time on My Hands.