Patricia Barber Elected To The American Academy Of Arts & Sciences 2019! 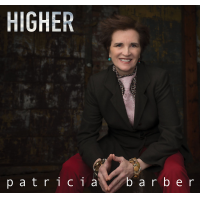 Barber’s election comes on the heels of last month’s release of her much-anticipated album Higher on the ArtistShare platform, which has already been premiered to great acclaim. She is currently touring the album in the United States, Canada, and Europe with her trio featuring Patrick Mulcahy and Jon Deitemyer.

Barber, renowned as both jazz pianist/singer and composer, has made twelve studio albums for Antilles, Premonition, Blue Note Records, Concord, and ArtistShare.

Praise for On Higher

“The album delivers a sea of serenity and crystalline works, sometimes full of emotion, and then full of hope, or even humor. Yes, from a textual and musical point of view, Higher is a poetic gem that far surpasses Barber’s previous works. And that is remarkable for an artist who has set the bar extremely high for herself for three decades.“ —Hifi.nl

“As a pianist and vocalist, she is a force to be reckoned with. As a songwriter, she is pure devastation.” —Jazz Police

Internationally acclaimed American composer singer/pianist Patricia Barber is back with a new recording on ArtistShare, her first since the critically celebrated Smash (Concord, 2013). Higher marks Barber's return with another form- shattering collection of original material.

Barber, who has also won a Guggenheim fellowship in Composition, once again brings thrilling original material into the jazz orbit. Featured on Higher is an art song cycle, “Angels, Birds, and I...", that can be performed by jazz vocalists and instrumentalists as well as classical singers. In 2015 Barber toured an early version of the cycle in concerts with Renée Fleming. In 2016 she took the cycle to Chicago's Harris Theater to open the prestigious Ear Taxi New Music Festival. Performing here with her long-time jazz trio (Patrick Mulcahy-bass, Jon Deitemyer-drums) and guests, Barber juxtaposes “Angels, Birds, and I..." with some of her celebrated arrangements from the American Songbook.