SOURCE: ALL ABOUT JAZZ PUBLICITY
August 29, 2008
Sign in to view read count 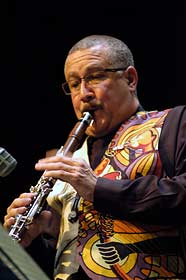 “The rockers have historically been the most courageous and honest musicians in Cuba, standing up to the Castro regime, and Gorki Aguila is the latest in that proud line, “ D'Rivera says.

“Make no mistake about it, the band's lyrics harshly criticize the Castro dictatorship, and that is the real reason Aguila is being detained, “ says Henry Gmez, spokesperson for Bloggers United for Cuban Liberty. “Aguila's arrest is a blatant case of musical censorship on the part of the regime and shows that nothing has really changed in Cuba under Raul Castro since Fidel disappeared from the public eye two years ago."

D'Rivera urges his fellow musicians around the world to publicly express solidarity with Aguila and denounce this case of repression and censorship.

“We need to stand together and honor these men with the guts to do what the vast majority of musicians in my impoverished country haven't done, “ D'Rivera says.

Born in Havana, Cuba, Paquito D'Rivera is the winner of nine Grammy Awards. D'Rivera is celebrated both for his artistry in Latin jazz and his achievements as a classical composer. His numerous recordings include more than 30 solo albums.

Bloggers United for Cuban Liberty is a confederation of blogs and Web sites that pool resources and ideas for use in campaigns to raise awareness of the Cuban reality.