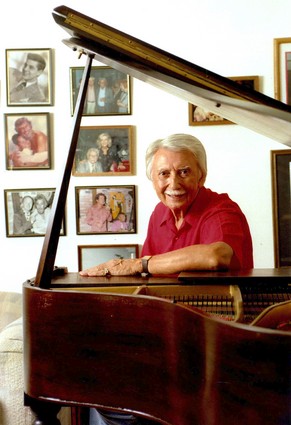 Page Cavanaugh, a veteran pianist-singer whose trio was a popular nightclub and recording group in the late 1940s and '50s and who became one of Southern California's most enduring lounge jazz artists, has died. He was 86.

Cavanaugh, who also was a composer and arranger during his more than 60-year career, died Friday morning of kidney failure at a skilled nursing facility in Granada Hills, said Phil Mallory, Cavanaugh's bass player for 18 years.

During the early days with his trio, Cavanaugh appeared with Frank Sinatra at the Waldorf- Astoria and elsewhere, played for NBC Radio's The Jack Paar Show and appeared in movies such as A Song Is Born, Romance on the High Seas, Big City and Lullaby of Broadway.

He was always a creatively fascinating artist throughout his long career. What he did with his most famous group in the '40s and '50s was to develop a new style, in which all three members of the group would sing in unison in a whisper fashion.

It was a time when jazz and popular music were in much closer sync than they are today, so that groups like Nat Cole and George Shearing and Page Cavanaugh could play with a distinctly jazz flavor and still reach large audiences and sell a lot of records.

The Page Cavanaugh Trio, which placed in Top 10 polls in Down Beat and Metronome magazines from 1946 to the early '50s, had chart hits such as “The Three Bears" and “She Had to Go and Lose It At the Astor."

Cavanaugh, whose trio also performed at clubs like Ciro's and the Trocadero in the '40s, had his share of long-run gigs, including regular stints at the Captain's Table on La Cienega Boulevard in the early '50s and at the Money Tree in Toluca Lake in the '80s and '90s.

In the early '60s, he formed a seven-piece group, “The Page 7", that recorded for RCA and appeared on The Ed Sullivan Show and other TV programs.

Around the same time, he opened his own club in Studio City. But Cavanaugh, who performed solo in Las Vegas for a number of years in the '80s, had his share of career ups and downs.