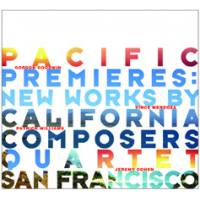 Well versed in the violin’s deep jazz roots, Cohen combines his love of jazz and classical music in QSF. “As both a classically trained and improvising jazz violinist,” he says, “I began to write and arrange music that had the sounds of my generation in it—Santana, Earth, Wind & Fire, Tower of Power, and so many more. Combine this modern musical era with the chamber music tradition inside of a developing young musician, and you have the seeds of QSF’s DNA. The creation of Quartet San Francisco in 2001 was a clear move to encourage, create, and perform works from this modern age of chamber music.”

Recorded at Skywalker Sound in Nicasio, CA by the Grammy Award–winning engineer Leslie Ann Jones, and mixed by Judy Kirschner, Pacific Premieres rivets from beginning to end, offering an experience unlike anything else on the scene. Employing the subtle dynamics, textural acuity, and technical prowess of a top-flight string quartet, QSF maintains the improvisational imperative and emotional intensity of a hard-bop combo. Whether you call it chamber jazz, third stream, or simply new American music, the ensemble has honed a singular sound that has inspired some of the era’s most celebrated composers.

“The ability to swing began to steal into the ranks of classical strings players a few years ago,” critic Doug Ramsey wrote in his review of QSF Plays Brubeck. “Although they may not discuss it in the polite company of their easily-shocked older colleagues, some of them are also improvising with proficiency and joy. There is convincing evidence of both phenomena in the QSF’s CD of 10 pieces by Dave Brubeck, and Paul Desmond’s ‘Take Five.’”

Since QSF’s last release, the band has undergone some personnel shifts, resulting in a prodigious new lineup. Through the group’s work in the San Francisco Symphony’s Adventures In Music program, the quartet shared some 170 performances before heading into the studio.

Joining Cohen on violin is Matthew Szemela, a Mannes College graduate who has performed widely in pop, jazz, chamber, and symphonic settings, including collaborations with tap master Savion Glover, vocalist Cassandra Wilson, and rapper Jay-Z; Santa Cruz–based Chad Kaltinger, an active freelancer around the Bay Area who performs widely in an array of settings and is the principal violist for Opera San Jose and the Santa Cruz Symphony; and cellist Kelley Maulbetsch, a member of the Marin, Santa Rosa, Fresno, Monterey, and Modesto Symphonies (and assistant principal cello of the Sarasota Opera Festival) who also freelances extensively and performs in the bands of major San Francisco stage productions.

Quartet San Francisco will premiere the music of Pacific Premieres at Yoshi’s Oakland on Thursday 9/26 at 8:00 pm.