Out of the Rifftides Past: David Newman 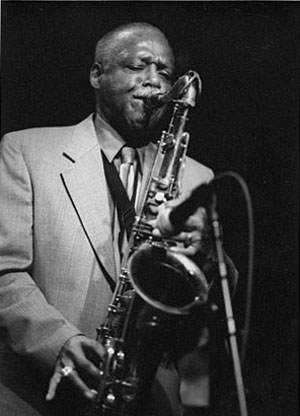 slideshow
Now and then the Rifftides staff rummages through the archives, wondering what was on the blog early in its history. Yesterday we found a review from four years ago, to the day. It discusses an album by a musician whose death in January, 2009 gives the last line poignancy we could not have anticipated when the piece first appeared.

One minute and twenty-six seconds into a blues called “Bu Bop Bass" on his new CD, Cityscape, the tenor saxophonist David “Fathead" Newman begins his solo with a phrase that consists of two quarter-note Fs, a quarter-note A and a half-note A--an interval of a major third in the key of F concert. How simple; except that it is not simple. It is complex, because Newman gives each note a customized time value that no annotator could capture on paper. They are Fathead Newman quarter notes and a half note. In addition, he gives the half note a slight downward turn, not so far that it becomes A-flat, just far enough that it's a David Newman moan, a characteristic of his expression. Furthermore, he plays the phrase, as he does all of his music, with a tone that manages to be full and airy at the same time, not quite like anyone else's tone. Newman has invested a one-bar phrase with his personality, so that anyone familiar with his work will know in that instant who is playing.

This sort of thing is what experienced musicians, fans and critics have in mind when they say that there was a time when they could recognize a soloist after a few notes. Except in the nostaligic minds of older listeners, that time is not gone, although it must be conceded that there are plenty of young soundalike players on every instrument. Is that a new phenomenon? Aside from specialists, could anyone really tell apart all of those disciples of Coleman Hawkins in the late 1930s and early forties, the herd of alto saxophonists in the 1950s who wanted to be Charlie Parker, the 1960s trumpeters who aspired to be clones of Freddie Hubbard? Imitators are eventually lost in the crowd. Individualists stand out.

On Cityscape, Newman places himself in the context of a seven-piece band similar to the six-piece Ray Charles outfit in which he became well known in the 1950s. He hasn't recorded in that setting in a few years, and it's good to hear again. The sound and feeling are reminiscent of the Charles days, but Newman and pianist-arranger David Leonhardt have collaborated to make the harmonic atmosphere fresh. Howard Johnson fills the crucial baritone saxophone chair. Benny Powell, often sidelined by illness the past few years, is on trombone. He and Johnson solo infrequently but well. With Winston Byrd on flugelhorn, they fill out the rich ensembles behind Newman's tenor and alto saxophones. On alto in a piece called “Here Comes Sonny Man," Newman recalls “Hard Times," one of the records that made him famous with Charles.

This is basic music mining a rich tradition that grows out of jazz, rhythm and blues and the expansive territory band history of the American Southwest. No one alive does this sort of thing better than Fathead Newman.