Out Now: Raul Midon's "A World Within a World" on Manhattan Records

SOURCE: ALL ABOUT JAZZ PUBLICITY
October 3, 2007
Sign in to view read count 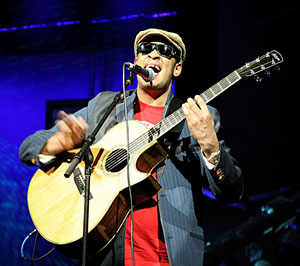 slideshow
On September 25th, Singer-Songwriter Raul Midon released A World Within a World on Manhattan Records. Greatly influenced by a multitude of genres - pop, rock, soul, latin, jazz and more - the third album from this incredibly talented songwriter is not to be missed!

Raul Midon, a New Mexico-born, New York-based writer/vocalist/guitarist burst onto the scene in 2005 with his audaciously original debut album, State of Mind, and he's followed it up with an even more memorable song cycle, one that substantiates the depth of his talent and the degree of his dedication. A World Within a World, the title of the new album (Manhattan Records, Sept. 25), might refer to the status of pop music within the culture as a whole; it could also describe the expansive interior realm that this single-minded artist, blind from birth, has created with his imagination.

Midon was born in Embudo, N.M., to an Argentinean father and an African-American mother. A passionate music lover for as long as he can remember, Midn started playing drums at age 4 before shifting his focus to the guitar. He turned down a scholarship in creative writing offered by the University of New Mexico after being selected by the University of Miami for its highly regarded jazz program. Staying in Miami after graduating, Midn became an in-demand backup singer, working primarily on Latin projects for artists like Julio Iglesias, Shakira and Alejandro Sanz, while moonlighting as a club performer, sprinkling the requisite cover songs with the original tunes he was starting to write.

In 2002, when Midn felt he was ready, he walked away from his lucrative profession in order to pursue a solo career in New York City. “I wanted to become an artist and do what I wanted to do instead of being someone else's hired gun," he explains. When Midn performed for the legendary producer/arranger Arif Mardin, fresh off the recording of Norah Jones' breakthrough album, Come Away With Me, he offered the newcomer a deal on the spot-it would be the final signing of Mardin's long career. Ral readily accepted, eager to form a partnership with the highly skilled veteran and with Arif's multi-instrumentalist son Joe. Father and son co-produced State of Mind, which garnered critical accolades for its heady fusion of old-school soul, timeless pop, Latin, jazz and the singer/songwriter idiom. Intrigued by what the youngster was cooking up, Wonder himself appeared on one track.

For A World Within a World, recorded after the death of the elder Mardin, Midn and Joe Mardin tightened the focus, with Joe laying down the grooves and playing additional instruments behind Midn's vocals and guitar parts on the majority of the tracks. “Like his father, Joe is a producer in the old-school sense of the word," says Midn. “He's interested in how a record sounds; he can do arrangements and conduct an orchestra-which he did on 'Pick Somebody Up.' Joe brought the value of making an album to the project, as opposed to just a collection of songs."

This is not your average pop record-not by a long shot. With A World Within a World, Midn has fashioned an album that is at once audacious and accessible, of the moment and suffused with history; it's personal yet universal, uncompromising yet inviting. This is that rare sort of pop album that could actually make a difference, and as such, it stands right alongside the pivotal works of the artists who inspired it.

If you haven't had a chance to check out Midon's high energy live performance, you'll get your shot week of release when he performs on The Tonight Show with Jay Leno, Sept 27 and on The Late, Late Show with Craig Ferguson on Sept 28 - and at any of the following tour dates:

Oct 26 Vancouver, BC The Plaza Club