Regarded by aficionados of Anthony's music as one of his finest releases, “Slow Dance” is a two part orchestral rock suite. 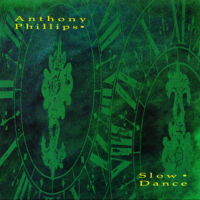 Esoteric Recordings are proud to announce the release of a newly re-mixed and expanded deluxe 3-disc edition of the classic 1990 instrumental album by Genesis founding member and guitarist Anthony Phillips, Slow Dance. Regarded by aficionados of Anthony's music as one of his finest releases, Slow Dance is a two part orchestral rock suite which showcases Anthony's music at his most expansive and imaginative.

This new 3-disc (2 CD / 1 DVD) digipak Deluxe Edition of the album features a newly re-mastered original stereo mix and a 5.1 Surround sound mix by Simon Heyworth (on an NSTC / Region Free DVD), along with a CD of previously unreleased Slow Dance Vignettes. It includes a lavishly illustrated booklet that fully restores the original album artwork and features a new essay by Jon Dann.

Says Ant, “ Slow Dance was an important album to me because it represented the first time that was I able to do a full-scale album after all the miniatures of the, for me, thrifty 80s! I had stockpiled a number of ideas during those years and finally, due to the promise of an advance from my then record company, Passport, I was able to realise these on the big canvas, as it were. Alongside those ideas, I wrote a lot of new material, helped by the new gear, most which feature on Side 2. I was kindly advanced the money by my management Hit & Run and then….Passport went bust….?!!!

“Album all written but not recorded…! What to do …?! Hit & Run were terrific, didn't pressurise me and I was able to complete the album, secure a publishing deal with Virgin—which led to my catalogue being realised on CD- so the gamble paid off… Phew !! But it was veritably a labour of love. Seven months very hard work. No road map for that album. Did it make sense …? One long continuous piece, broken up into two sides…?

“I really wasn't sure and having finished it, found listening to it unbearable ! Yet years on it has its admirers (one who even says he has not been moved thus by an album since…). So I must have got something right—and in the re-release we have tried to really make the re-purchase worthwhile with the improved sound of the main album, the extras CD and the 5.1. I hope the public agree!”

Anthony Phillips is a composer and guitarist who is known as a prolific writer of music for film and television as well as a recording artist. He was a founding member of the band Genesis alongside Peter Gabriel, Mike Rutherford and Tony Banks with whom he recorded the albums From Genesis To Revelation and Trespass. After leaving the group in 1970, Ant studied orchestration and harmony externally at the Guildhall School of Music and Drama in London. After passing his LGSM exams, he taught music at Reeds School and Peper Harrow whilst continuing to compose and record in his home studio.

Ant released his critically acclaimed debut solo album The Geese & The Ghost in 1977 and since then has created a large and diverse output as a recording artist. As well as album releases such as Wise After The Event, Sides, Slow Dance and Field Day, he has to date also released eleven albums in the “Private Parts & Pieces” series and four volumes in the “Missing Links” series. Amongst other projects, he collaborated with Harry Williamson on the large-scale instrumental work “Tarka” and he also co-wrote the stage musical “Alice” with Richard Scott.

Whilst Ant continues to release solo albums to critical acclaim, increasingly his music has also been much in-demand for film and television. Commissions have included scores for both dramas and documentaries and he has written and recorded music for over a dozen Survival programmes in collaboration with percussion virtuoso Joji Hirota, including the award-winning “Land of Dragons” and “Creatures of the Magic Water.”

Ant has also established himself as one of the most prolific and successful composers of library music, with tracks from his extensive output being regularly featured on commercials, films and television series throughout the world.

2014 saw Ant renewing his association with Cherry Red Records via the Esoteric Recordings label who are re-issuing his back catalogue. “Harvest of the Heart,” a five-CD deluxe box set anthology which celebrates Ant's rich musical heritage by featuring recordings made between 1969 and the present day was released in November 2014 to wide-spread acclaim. Subsequent re- releases have included Private Parts & Pieces I- IV (a deluxe clamshell box set of the first four albums in that series) and deluxe editions of the albums Wise After The Event, Sides and 1984 all of which feature new stereo and 5.1 surround sound mixes.

Esoteric Recordings also recently released the definitive edition of the 1977 seminal debut solo album by Ant, The Geese and the Ghost. The music album could arguably be seen to have begun life as far back as 1969, but in essence it was the result of nearly four years hard work by Anthony, in collaboration with Mike Rutherford (who co-wrote three of the pieces on the record), beginning with a series of recordings made on TEAC 4 track tape recorders, progressing to sessions on the barge studio of engineer Tom Newman. Enlisting the assistance of Phil Collins, John Hackett, Viv McAuliffe, Jack Lancaster and many others, The Geese and the Ghost finally appeared in 1977 in America on the Passport label and in the UK on the Hit & Run imprint.

Lauded by many as a supreme achievement, this definitive of The Geese and the Ghost has been newly re- mastered from the original master tapes by Simon Heyworth and includes a stunning new 5.1 Surround Sound mix of the album by Andy Myles and Simon Heyworth, along with a CD of demos and early versions of the tracks on “Geese”. The bonus tracks are completed with the addition of both sides of an abortive single from 1973, “Silver Song” and “Only Your Love” (previously unreleased). Both tracks feature Phil Collins as vocalist. This 3-disc clamshell box edition includes a lavishly illustrated booklet with new essay by Jonathan Dann and fully restores the original UK album artwork.