SOURCE: ALL ABOUT JAZZ PUBLICITY
August 28, 2007
Sign in to view read count 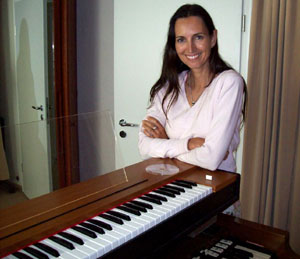 slideshow
In many ways Barbara Dennerlein is a study in contrasts. From a North American perspective she is an insider's tip, a superlative Hammond B3 player known to hardcore jazz fans, admired by fellow B3 players, and respected by her musical peers. We can contrast that with how she is known in the German speaking countries of central Europe.

In those European countries she has achieved a level of recognition unusual among jazz musicians. She has performed on prime time national television scores of times, she's done talk shows, morning shows, and in depth interviews. A film crew followed her around for a television documentary entitled Life Lines. She had her own late night radio show where she introduced new jazz and blues releases once a month. She was the very first person honored as Germany's Ambassador of Jazz. On the week of her fortieth birthday German television did a retrospective and rebroadcast several concerts she had done over the years. And just this summer she was invited to be the sole studio guest on a special “Best of" show with Harold Schmidt [Germany's David Letterman.] She played two numbers with the house band and spoke about her newest CD, Change of Pace (Bebab, 2007).

Germany-based AAJ correspondent Alan Bryson spoke with Dennerlein at length about her career, the challenges she's faced and the people she's had the good fortune to meet and play with over the years.

Check out Barabara Dennerlein: A Study in Contrasts at AAJ today!