SOURCE: SOMETHING ELSE!
January 20, 2011
Sign in to view read count 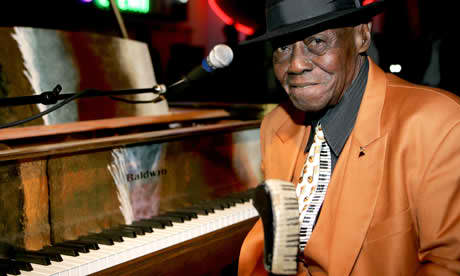 With “Grinding Man," a rollicking rapscallion highlight from his Grammy nominated album with Willie “Big Eyes" Smith, we get a winking glimpse into how 97-year-old Pinetop Perkins has kept himself going all these years.

Perkins, who like Smith made his bones playing with Muddy Waters, connects the dots between blues music's rustic era pioneers like Robert Johnson and the gritty post-war urban sounds that succeeded them. Born in July 1913 in Belzoni, Miss., Perkins backed Robert Nighthawk and toured with Ike Turner before he started playing with Waters in 1969, replacing Otis Spann.

That's where he met Smith, then the drummer in Muddy's outfit. They continued after Waters' death in 1983 with the aptly named Legendary Blues Band. Their lengthy partnership then reached another apex with 2010's thoroughly enjoyable Joined at the Hip, which earned the Grammy nod last month for best traditional blues album.

A shared history, this common bond that goes deeper than blood, plays out terrifically on “Grinding Man," as Perkins, still rolling and tumbling at the upright, takes over from Smith for a rare vocal turn. There's no denying the power, and the purring sexuality, of the song—part of a long-held blues tradition of tongue-waggingly salacious innuendo surely not lost on Perkins, named top pianist in the 2010 Living Blues Awards' readers poll.

“Some call me Pinetop Perkins, some of them call me the grinding man," Perkins yowls, as Smith, 74, grinds away on his first instrument, the harmonica. “Used to have so many customers, it'd take me a whole week to get around!"

Over Pinetop's many, many years, we've heard plenty of folks playing this kind of rough and randy blues music, but Perkins—to paraphrase fellow Waters alum Bob Margolin — is this kind of music.

Like the ageless Perkins himself, it just never gets old.