One Track Mind: Adrian Belew on Songs from King Crimson, His Power Trio and the Bears 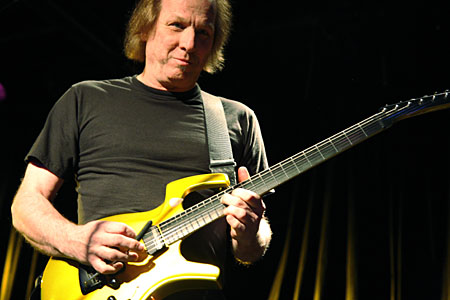 slideshow
On this special edition of Something Else! Reviews' One Track Mind, we hand the reins over to Adrian Belew, guitarist with King Crimson.

Discover why he likes working with younger musicians (no mortages or spouses to lure them out of the studio!), and how he'd like to push Crimson's double-trio format even further out. Reminesce on Belew's criminally underappreciated side project the Bears, and find just how relieved he remains that “Oh Daddy," his late-1980s novelty favorite, didn't become a bigger hit ...

“I'M DOWN," solo (TWANG BAR KING, 1983): The opening track from Belew's second solo album, “I'm Down" confirms his life-long passion for the Beatles—something that continues to work as a counterweighing pop influence against the King Crimson guitarist's more experimental leanings. Next comes a series of entertaining and challenging musical investigations, highlighted by “She Is Not Dead," with lyrics sung over a backward version of “Hot Sun" from Belew's debut.

Belew: There are different sides to what I like, but I am hugely influenced by the Beatles. When I was kid, that's what got me to being interested in becoming a recording artist at first. I always liked different kinds of music, as well, and King Crimson fits more into that mode. I like a lot of different things. But it's hard when you are writing pop music not to want to keep the spirit of the 1960s alive.

[SOMETHING ELSE! INTERVIEW: Adrian Belew talks about the future of King Crimson, his brilliant orchestral reimaging of 'e,' and attending the Frank Zappa School of Rock.]

“e," with the Power Trio (e, 2009): Perhaps the most propulsive thing on this project, with towering layers of guitar and a merciless groove from the Slick siblings. Despite giving this youthful pair its big break, Belew didn't initially see himself in the same role that Frank Zappa had played in his own career—shepherding talented youths toward wider notice.

Belew: That was only after the fact. I didn't intend for that to happen, so I won't take credit. Much like Frank, I was just needing musicians to play my stuff. The fact is, they were young and smart and sharp players. There's something about being young; they just wanted to do everything. When you play with older guys who have more accomplishments, they don't want to do everything. They are concerned about their mortgage and what their wife says. These kids had nothing else going on. They wanted to do it all. So, it was really a perfect moment in time. I don't know how it would have ever happened if I had gone out to find it. Instead, it found me. One of the things I liked about the Slicks was that they were accepted by me peers. People like (King Crimson founder) Robert (Fripp), and (legendary bassist) Tony (Levin) and Pat (Mastelotto, Crimson's drummer). They really saw why I had said these kids were so great. They welcomed them into that family, and not a lot of people are.