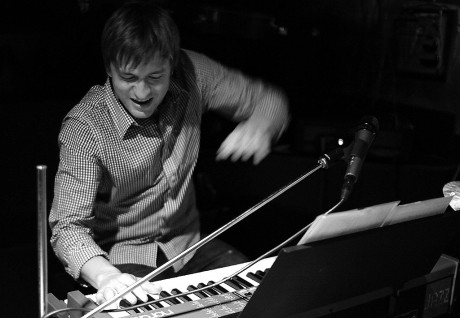 slideshow
Young jazz Hammond organist Ondej Pivec (b. 1984) is releasing his new album Overseason. Pivec is leader of the Prague-based Organic Quartet, an ensemble which has already recorded two albums during its brief existence (Don't Get Ideas, winner of the Czech Academy of Popular Music's 2006 Best Jazz Album award, and Never Enough). The album was recorded in New York, where Pivec and his colleague from Organic Quartet, drummer Tom Hobzek were visiting in the summer of 2007 on a “trial run." They wanted to learn from their musical idols, make some contacts, play a little and be part of the jazz metropolis of the world, at least for a while.

The fact that they returned with a complete album was primarily the result of a number of fortunate coincidences: listening to Never Enough aroused the interest of guitarist Jake Langley, regular band mate of Joey DeFrancesco, one of the best Hammond players in the world. Pivec's short performance with guitarist Peter Bernstein later opened the doors for him to a recording studio on Long Island. Hobzek's participation in a jam session brought in Joel Frahm, a saxophonist who has recorded with such top names as Brad Mehldau, Kurt Rosenwinkel and Lee Konitz. Overseason features four new compositions by Pivec, one by Hobzek and one by Langley; two standards round out the repertoire.

The material was prepared in one week and the album recorded in one day. The sound of the album is bursting with the spontaneity with which the album came together “unplanned," as well as the drive that Pivec and Hobzek got out of working with musicians who are already well-established in the New York jazz scene.