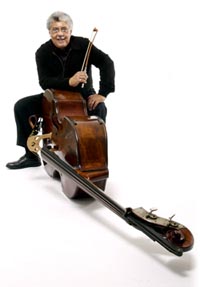 slideshow
The Brilliant Follow Up to Out Front (2010, Motema Music)

As an artist, Rufus Reid defines evolution and growth.  On the double bass, he seems to have reached the pinnacle of mastery on his instrument only to push the melodic, rhythmic and harmonic envelope further each time you hear him.  As a composer, Reid set out to make his mark in this discipline not too long ago and has simply taken off, gaining major recognition and landing numerous grants and awards.  In addition to the new music on Hues of a Different Blue (produced by Suzi Reynolds and to be released on April 12 on Motema), Reid will enjoy the debut of his three-movement symphony orchestra work, Mass Transit, taking place over two performances (May 7, 2011 in Idyllwild, CA & May 8 at The Redcat Theater in LA), which serve as the culmination of his Guggenheim Fellowship Project.  Reid was also awarded the prestigious MacDowell Colony Fellowship in 2010.

Since their previous recording, Out Front, the fantastic chemistry of the Out Front Trio (Reid with Steve Allee and Duduka Da Fonseca) has only grown stronger and deeper, plainly evident in their reading of Reid's new compositions and the standards that comprise Hues of a Different Blue.  We were also amazed to witness an immediate camaraderie and excitement for the music throughout the sessions from our new musical guests as we met and made music together with them for the very first time.  For me, this is what the real meaning of jazz is!, stated Reid.

While Reid was certainly “the architect" (as Allee called him) of the project, the making of  Hues of a Different Blue was geared toward featuring everyone in new and exciting formats.  Reid explains further, In designing these arrangements, my goal was to feature the unique sound of the trio and the unique voice of each guest, in unexpected ways that would offer a new musical experience for each player, and an exciting new surprise for you as well.  I'm delighted with the results and hope you will be too.

With Hues of a Different Blue, Rufus Reid has created an album of music that can best be described with one word, unforgettable; clearly for the musicians, but most importantly, for the listeners.  It is a joy in life to witness an artist hitting a creative stride; Rufus has been on one for many decades, and that continues unabated with this recording.  It is a valuable experience beyond measure to view great visual art, to read exceptional literature, and to hear extraordinary music, as each piece carries with it the possibility for us to reflect on ourselves and humanity, and delight us in ways we never thought possible.  Hues of a Different Blue accomplishes just that, and as Rufus says in his velvet baritone, you can't get any better than that.