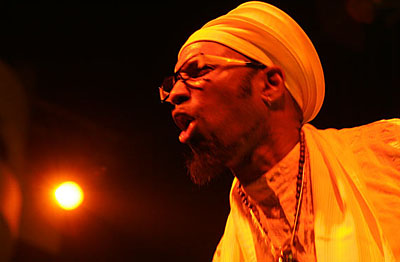 slideshow
Philadelphia, PA: The Annenberg Center for the Performing Arts kicks off its 11/12 Latin Roots series with the dual presentation of Omar Sosa Afreecanos Quartet and Jerry Gonzalez and the Fort Apache Band with special guest Dafnis Prieto, October 28, 2011 at 7:30 PM. With both critically-acclaimed acts showcasing their unique fusion of complex Latin rhythms and impeccable jazz improvisations, lines between Latin and jazz fall to the wayside in an all-out celebration of dynamic, exhilarating rhythms in this one-night-only performance. Tickets are $20-$45. For tickets or for more information, please visit AnnenbergCenter.org or call 215.898.3900. Tickets can also be purchased in person at the Annenberg Center Box Office.

Five-time Grammy-nominated Cuban composer and pianist Omar Sosa is one of the most versatile jazz artists on the scene today. Hailed by All About Jazz as a true “fusion artist in the best sense of the word," who “mixes his Cuban roots with tastes of bebop, free jazz, even hip hop and electronica, into a strikingly fresh and spicy modern stew that's much more than the sum of its ingredients," Omar Sosa unifies genres with his dynamic playing and improvisational mastery. Sosa's fifth solo recording, Calma, released in March 2011 and steeped in unorthodox harmonic sensibilities, received a Latin Grammy nomination for Best Instrumental Album. He is joined on the Annenberg stage by his Afreecanos ensemble, featuring drum-and-bass pioneer Marque Gilmore, Mozambican electric bassist Childo Tomas and noted Cuban saxophonist Leandro Saint-Hill, all traveling from Europe for this performance. The ensemble fuses the folkloric with the contemporary, the ancestral with the urban&#151all with a Latin jazz heart. Copies of Omar Sosa's Calma are available to press upon request.

Continuing the Latin fusion theme of the evening's double bill, Jerry Gonzalez and the Fort Apache Band—the band the New York Times calls “the best Latin Jazz group working" and one of the most influential modern Afro-Caribbean jazz groups in the world, will take the stage alongside special guest Dafnis Prieto. The sophistication of the Fort Apache Band's carefully crafted sound is highlighted by the group's ability to bring a jazz flexibility to the Latin rhythm section with ease and expert flare. As noted in the New York Times, “a Fort Apache tune may start out swinging with the feel of the drummer...then move into a Cuban guaganco, then take on a shuffle, then return to swing." The band features Jerry Gonzalez on trumpet, flugelhorn and congas, backed by premiere bassist Andy Gonzalez, leading jazz pianist Larry Willis and noted alto and tenor saxophonist Joe Ford with special guest and 2011 MacArthur Fellow, drummer Dafnis Prieto.

In celebration of the Annenberg Center's 40th Anniversary, there will be several opportunities for audience members to get to know each other and the Annenberg Center staff throughout the season. To kick off this celebratory season, the Center will be toasting the past 40 years of excellence and its exciting future with festive sparkling cider. One of these toasts will take place following the Omar Sosa Afreecanos Quartet & Jerry Gonzalez and the Fort Apache Band performance.