Omar Sosa: A Week At The Blue Note And Across America 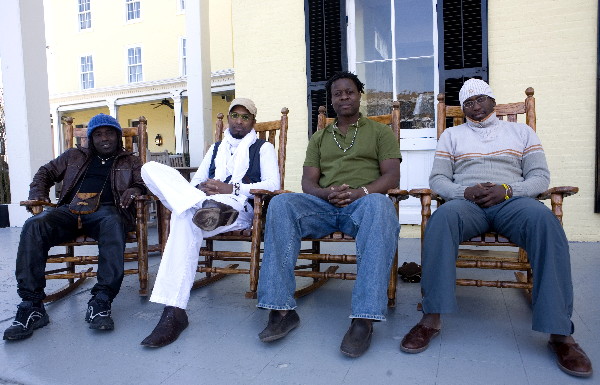 The impressionistic, universal sound of Omar Sosa comes to America for three weeks with his Afreecanos Quartet, beginning on April 27, 2011 at Dakota Jazz Club, Minneapolis and ending on May 18 at Yoshi's in San Francisco, the place where it all started for the Cuban-born world jazz creator in the late '90s. During the tour, over May 3-8, Sosa's Afri-Lectric Quintet, joined by revolutionary guitarist Lionel Loueke, will play a week-long residency at the Blue Note in New York City.

Pianist Sosa set out in his pre-San Francisco days to fuse all the music of the African diaspora into one, and added the improvisation of jazz on his arrival in the Bay City in 1997. Now, with twenty-two breath-taking albums recorded for San Francisco label Ota Records, Sosa has created a folkloric and impressionistic picture of uplifting music that includes effects and samples triggered by the pianist while playing (with also occasional bass support from the Fender Rhodes positioned at his left), and his soloists and percussionists. On this tour, Sosa is accompanied by his long-time bassist and vocalist from Mozambique, Childo Tomas, who sometime favors a twin-necked electric bass, the saxophone and flute of San Franciscan Peter Apfelbaum and percussion from Marque Gilmore. In New York, he will also be joined by trumpeter Joo Kraus, and Loueke.

Sosa's superlative blend of sounds is both a revelation and the future. He began with Afro-Cuban music and spoken word vocals, as well as neo-classical and artful solo piano albums (including influences from composers Bach, Satie and Chopin), then added the sounds of Africa itself and other world musics. He has also played inside the piano to add texture and emotion (he is a fan of John Cage!).

In 2004, Sosa released a brilliant album entitled Mulatos (Ota Records, 2004), which is for many an indispensable recording. Nominated for a Grammy in the Best Latin Jazz Album category (and including clarinetist Paquito D'Rivera on three tracks), Mulatos is a forest of sounds, and also beautiful tunes: Sosa's “Iyawo" sits alongside the notable “Dos Caminos," with its gentle and colorful clarinet melody that is also faintly reminiscent of Charlie Parker at its final cadence. The traditional sounds on other tracks simply “take you there," to the countries of their origins.

Sosa's latest album is Calma (Ota Records, 2011), a solo album improvised at the piano (and including Sosa's Fender Rhodes, and effects and samples triggered from atop the keyboard—his samples are usually of traditional music, and include pygmy water players and Tuvan throat singers). Recorded in New York, Calma reflects the state of calm and peace that Sosa has been searching for, and draws on his classical piano influences as well as world music and jazz greats such as Thelonious Monk (Sosa calls Monk's musical philosophy “a philosophy of freedom"), Bud Powell, and Randy Weston.

Impressions of Africa, impressions of Latin America, and impressions of the world. Sosa unites them all with his brilliant band. To see Sosa is to see the world, and to own his albums is to possess a part of it, at least until you board that plane and see it in person, and, as Omar Sosa says “go and touch the earth (yourself)."

The upcoming tour dates are: