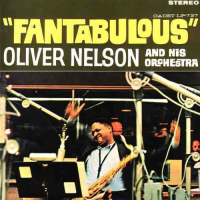 slideshow
Oliver Nelson occupies an interesting space among jazz composers and arrangers in the 1960s. While not as well known as Quincy Jones, Lalo Schifrin or Claus Ogerman, Nelson is a favorite among those familiar with his music. Unlike many of his peers, Nelson specialized in explosive, blues-centric jazz compositions and charts that could wail and moan with the muscular drama of a film noir score. What's more, Nelson played tenor saxophone on many of his own sessions, giving the orchestra a firm spine and distinct mournful flavor.

Nelson had three careers during his upward trajectory. Though he began recording on R&B sessions for Louis Jordon in 1951, his first jazz leadership recording came in 1959 with Meet Oliver Nelson for Prestige's New Jazz label. A string of recordings for the label followed until 1960, when producer Creed Taylor hired him to record an orchestral album. The album—The Blues and hte Abstract Truth—was recorded in February 1961 and would become one of the six LPs Creed released at once when he launched his new Impulse label at ABC-Paramount.

The Blues and the Abstract Truth wasa tour de force of arranging and playing that kicked off the second phase of his career. After the album came out to sterling reviews, Nelson began recording at a ferocious pace in the early 1960s as a leader and a sideman. When Creed became head of Verve following the label's sale to MGM, he brought Nelson on to arrange a series of albums, including several by organist Jimmy Smith.

What makes this album special are the heavyweight bluesy solos by pianist Patti Bown, alto saxophonist Phil Woods, flutist Jerome Richardson and Nelson's tenor sax. Nelson's writing is strong, complex and varied throughout but always swinging. It's cinematic but not Hollywood. More action TV than big screen. In this regard, the album is like a distant cousin of The Blues and the Abstract Truth, with Billy Taylor's A Bientot serving as the album's Stolen Moments.

Nelson had plenty of gas in his tank but not much in the brakes department. He worked relentlessly, especially after moving out to Hollywood in 1967 (the third phase of his career), when he wrote for TV and the movies. Sadly, Nelson died of a heart attack in 1975 at age 43.

JazzWax clips: Here's Take Me With You...