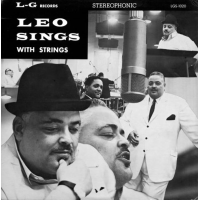 slideshow
After-hours jazz clubs had a certain magic and nocturnal charm in the 1950s and '60s. They existed because in many cities, mainstream jazz clubs were regulated and had to issue a last call around midnight. Musicians and audiences in the know would then head off to clubs with bottles stashed out of sight and plenty of great talent on stage. Many of these clubs operated in neighborhoods that the police left alone.

So in St. Louis, Mo., when the clubs closed at 11 p.m., the jazz crowd drove 15 minutes over the Mississippi River to East St. Louis, Ill., a town packed with after-hours clubs. One of the most popular spots was Leo's Blue Note Club, at 4200 Missouri Ave. Leo was Leo Gooden, who in addition to owning the club was a vocalist and songwriter. He fronted a funky hard-bop, organ-and-horns quintet called Leo's Five, which served as the house band.

Gooden (above) also could sing. His pleading style was something of a cross between Jimmy Scott and Billie Holiday, only Gooden's sound was larger and less animated. While he didn't necessarily sing in key, Gooden must have been a hit with the ladies. He always sounded as if he were singing down on one knee.

Gooden was hugely supportive of the musicians who played at his club, and they loved him in return. By the early 1960s, when Leo launched his own label, L-G Records, arranger Oliver Nelson offered to record him with strings, one of Gooden's dreams. The album was entitled Leo Sings With Strings. As Nelson points out in the album's liner notes, Gooden had a unique singing style and phrasing that sounded as if he was always catching up to the rest of the band. Interestingly, Gooden's singing style was perfectly suited to Nelson's arranging, since Nelson, too, loved to linger behind the beat.

In 1963, Nelson (above) flew out to St. Louis to choose 12 songs with Gooden. Then he returned to New York to write the charts. When it was time to record, Gooden flew to New York, and the record session was done on two dates at Fine Recording Bayside, C. Robert Fine's studio in Queens. The engineer on both dates was George Piros.

Nelson assembled a crack orchestra—eight violins, two violas, two celli, four woodwinds, an organ, bass and drums. And the musicians chosen were the cream of the studios at the time.

Here's the personnel, combined, for the two dates:

What makes this album sensational and addictive is Nelson's string writing. It's bold, dramatic and engaging, forcing Gooden to open up and take chances. And he does. [Photo above of Oliver Nelson conducting the orchestra on a Leo Sings with Strings session by Chuck Stewart]

The tracks—Mood Tune (by Gooden), I Should Care, Pennies From Heaven, In My Solitude, In Other Words, Sophisticated Lady, Moon River, Poor Butterfly, They Wouldn't Believe Me, Would You (another original by Gooden), Midnight Sun and It's Magic.

As Nelson pointed out at the end of his liner notes, “For the role I played in this undertaking, I feel that this is some of my best string writing to date and that this showcase—Leo Gooden/Oliver Nelson—will cast an image much the same as Frank Sinatra/Nelson Riddle and Ray Charles/Quincy Jones, as another lesson in successful collaboration. [Photo above of Leo Gooden, right, with organist Donald James by Chuck Stewart]

I have to say that Nelson was right. The string writing is out of sight.

“Fine Recording Bayside was the former Everest Records studio. My father bought the facility and equipment when Everest's parent company, Bellock Instruments, shuttered the record label in early 1961. The studio was unique because it had been outfitted for 35mm magnetic film master recording as well as tape. It had a big Westrex console in the control room, custom made for Everest. [Photo above of C. Robert Fine at the Bayside Westrex Console courtesy of Tom Fine]

“Leo Gooden's album was likely recorded live to 2-track stereo and full-track mono, given the time constraints described by Oliver Nelson in the liner notes. The engineer on this session, George Piros, was the head of disk-mastering at Fine Recording. In fact, George cut the master for the stereo version (tracks below). George was well-versed in fast jazz sessions recorded live to 2-track and mono. At the time of these sessions, he had already done a number of Mercury albums for Sarah Vaughan and other jazz and pop artists, working with Quincy Jones and Clyde Otis, among other producers. [Photo above of C. Robert Fine at the lathe, c. 1959, courtesy of Tom Fine]

“By the way, George (above) was my father's longest-serving and most loyal business colleague. They went back to Reeves Studios in the late '40's, and George was VP of my father's first studio, Fine Sound. George went on to become head of mastering for Atlantic Records. He retired from there in the early '80s and died soon afterward from diabetes.

George was one of the greatest disk-cutters. Among his superb cuts at Atlantic were the first U.S. editions of Led Zeppelin's Physical Graffiti and Houses of the Holy, plus a lot of the mid-'70s soul albums. He also was one of the engineers for Aretha Franklin's Amazing Grace double album and cut the original LPs."

JazzWax tracks: Leo Gooden's Leo Sings With Strings has never been issued in the digital format and is available only on vinyl, selling currently at eBay for up to $50. Even on vinyl it's rare—so rare it isn't listed in Tom Lord's Jazz Discography (I sent it along to Tom so he can bring his database up to speed).

JazzWax clips: Worry not. I wasn't going to write at length about a such rare album and not provide you with a few tastes. Here's “