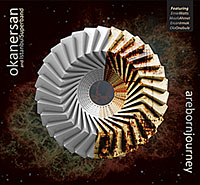 slideshow
Okan Ersan presented his passionate interpretation of life A Reborn Journey to the world, and as Dave Weckl cited, “A Reborn Journey has the potential to make a lot of noise in the world of jazz fusion- it's fresh and different!"

em>A Reborn Journey was released at the beginning of April 2011 and it blends different genres from Rock to Jazz and includes ethnic elements of Anatolian & Mediterranean tunes. After being chosen as one of the best 5 guitarists in 2003 in the British magazine 'The Guitarist' and achieving a great success in Leverkusen Jazz Festival for 3 consecutive years, Ersan now has released his second studio album “A Reborn Journey."

The concept of A Reborn Journey is a remarkable blend of Fusion-Jazz and Ethnic-Fusion tracks. Ernie Watts who also worked with The Rolling Stones, Steve Smith and Charlie Haden performed on three tracks. The well-known prestigious musician Ola Onabule performed “Stand!" which is the only track with lyrics. Mixing has been completed by the legendary drummer Dave Weckl in Los Angeles. Mastering has been finalized by the Grammy-Award winning George Whitty in Los Angeles who also worked with Dave Matthews, Carlos Santana, Richard Bona, Celine Dion , Michael and Randy Brecker, David Sanborn, Mike Stern and Chaka Khan.

Okan Ersan will be touring for concerts, seminars, master classes and workshops in the upcoming months.

A Reborn Journey is available worldwide.