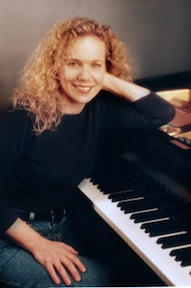 Barbara Higbie's Yoshi's Oakland artist-in-residency continues with something completely different: “Hills to Hollers" Exploring the interplay of black and white southern musical traditions. This is a first-ever pairing of the two most iconic singers in the Bay Area. Laurie Lewis, a renowned bluegrass vocalist, collaborates for the first time with soul singing legend Linda Tillery. Higbie, a championship fiddler as well as a jazz pianist and is the musical director as well as the 3rd harmony part in this concert. “These tunes represent the basis of all popular American music. Sung well, they can send shivers up your spine and your spirits soaring," Higbie says of the Hills to Hollers show.

“Barbara Higbie always seems to be discovering a new side of her talent," Larry Kelp wrote in the Oakland Tribune. In the Los Angeles Times, Don Heckman noted that Barbara “generated energy and enthusiasm whenever she was on stage, like a jolt of bright sunlight."

“This is beyond my wildest dreams; an artistic E-ride," says Barbara. “The chance to assemble great musicians in one of the best venues in the country is a huge honor. It's also one of the most exciting things I can imagine. The power of live music still surprises me. With this series, I hope to energize the musical conversation in the Bay Area."

During the Yoshi's Artist in Residence program Barbara will merge her exciting vocal and instrumental gifts with those of her closest musical friends and collaborators in a series of diverse and wide-ranging concert programs.

The schedule, to date, is:

October 20—Hills to Hollers with Linda Tillery and Laurie Lewis

Barbara Higbie has recorded on over 70 CD's, co-founded the group Montreux, worked with Santana, Bonnie Raitt, and Terry Riley among others. A professional musician since age 17, Barbara spent her early years in Indiana, Ghana and Orange County, CA with sojourns in Honduras and France. She now resides in Berkeley, CA with her husband and 9-year-old daughter.