NYC Saxophonist Adison Evans Celebrates The Hero In All Of Us

With Hero Adison Evans has made it clear that she is a creatively ambitious and immensely talented unique voice in modern music. This accomplished first release sets the stage for her brilliant future career. —Hrayr Attarian, All About Jazz 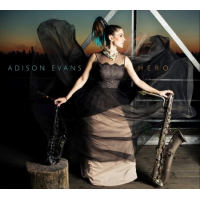 slideshow
Known for her work with Beyoncé, Jay Z and Demi Lovato; Adison Evans draws on her influences, travels and life experience HEROes that have influenced her both musically and personally for a deeply personal offering, that encompasses a love for jazz, R&B and positive affirmation.

Adison Evans is a dynamic millennial who has shared the stage with several legendary artists including: Trisha Yearwood, Nicki Minaj, Wynton Marsalis, Christian McBride, Terence Blanchard, JayZ, and many more. Evans made her debut in the pop world playing in the 2013 Superbowl with Beyoncé. Upon graduating from the Juilliard School, Evans embarked on a two-and-a-half-year adventure thus far playing and touring with Beyoncé in the “Mrs. Carter Show World Tour,” followed by Beyoncé and JayZ in the history making “On The Run” Tour. Evans can also be heard on the album that crashed iTunes, Beyoncé, and has been seen in many of her music videos including “Countdown,” the HBO Beyoncé specials, and Beyoncé DVDs.

HERO is Evans’ debut jazz offering, a well beyond her years emerging baritone and alto saxophonist who has done more world travel at the age of 25, than most of her contemporaries, Evans takes those experiences to task penning original compositions that offer deeper meaning and a sense of space and rhythm that normally takes years to achieve. Her infectious melodies offer a hand shake of jazz history and bridge-gap of genres with something for every generation to enjoy. Laced with positive affirmation, the Juilliard graduate teams up with long time bandmates from her college days: Mat Jodrell (trumpet/flugelhorn), Mathis Picard (piano), Dan Chmielinski (bass), Roberto Giaquinto (drums) and special guest Melanie Charles, who adorns the three vocal tracks.

Evans is a multi-talented visionary that takes each opportunity in life and adds vigor and zest to it for an exciting blend, so much talent wrapped up in one woman. A Juilliard graduate who has traveled the world time and time again, a French Culinary Institute trained chef, who also lived in Tuscany for a few months last year, to appearing on top late night TV shows, these experiences are combined into a lasting sound that eloquently binds a cohesive calling card of today’s jazz musician.

Examples of Evans’ versatility can be found in her originals like “Dropbear Boogaloo,” inspired by the folkloric Australian Dropbear, motivated with a 16th note based groove; watch out that grooving beat will drop on you. “The Epicurean,” written by one of Evans’ heroes, Steve Wilson and arranged by Evans, is what is best in today’s modern jazz player, Evans’ baritone saxophone is bold and warm with just the right amount of deep growl, she offers a strong musical theme, and is a master at developing her soloing into a robust statement. Trumpeter, Matthew Jodrell is a perfect musical pairing, offering a focused agile style, while utilizing a broad range on his horn.

Evans has penned two out of the three lyric based tunes, that feature the soulful vocal sounds of Melanie Charles. “Blue,” written by mentor Beyoncè Knowles and Jordan Cruz arranged by Adison Evans is profoundly moving. “Mama” an Evans original is certainly a fitting tribute to Evans biggest hero, her mother, giving the listener insight to why Evans is such a dynamic young woman. “Do What’s Best for You” another original, is an anthem for the everyday person who struggles with the daily grind, Evans has created a strong reminder to take a moment for you, and listen to your heart.

A deeply personal tribute to her late friend and photographer Yosra El-Essawy (Yoshi) is exhibited in a solemn prelude with “Prayer for Yoshi” and parlayed into “Never Forget to Say Thank You,” a befitting tribute to an ever positive friend who was battling stage four cancer and certainly an uplifting way to tie the overall journey of HERO into an enigmatic journey of life, relationships and love, which is the total human experience and the soundtrack of life.

Recorded at RiRo Muzik in Brooklyn, NYC on April 25th and 26th of 2015 and Engineered and Mixed by: Rozhan Razman, including Mastering engineer: Dave Darlington of Bass Hit Recording, HERO was fully-funded 100% by her fans who were excited about Evans’ debut, which gave Evans personal control over the synergetic vision of the project that was release in the Winter of 2016.

Evans maintains a busy touring schedule. With 2016 already bringing tour dates and sold out shows at the Deer Head Inn (NYC) and The Velvet Note (Atlanta) where Evans showcased her tunes from HERO, and had the audiences on their feet with encores. HERO also has been breaking ground at radio across the globe, reaching into the Top 11 on the American Top 40 jazz chart, only three weeks into its global release HERO is already proving its appeal from the UK to the US and beyond. A 5-star review from Amazon’s Top 100 reviewer Grady Harp sheds light on Adison Evans and HERO, Harp says; “A drop-dead beauty not only of physical appearance but also of musical talent in every aspect. This is an exceptional collection.”

Upcoming, Adison Evans will be performing CD release shows in NYC, March 23, 2016 at Fat Cat NYC, the Spring/Summer of 2016 at the Deer Head Inn, NYC and the Fall of 2016 in Atlanta, with a 2017 South Africa tour in the planning. All of this in between her touring commitments with other national touring acts as a side-person is quickly adding up to an exciting future for Adison Evans.