Nu Jazz Entertainment/ELM Records Announces The Vinyl Release Of An 80th Birthday Celebration! From NEA Jazz Master Ellis Marsalis In Celebration Of His 82nd Birthday For A Limited Time! 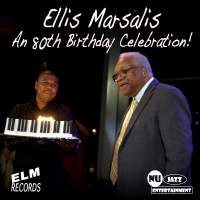 The double disc vinyl album will be released through the Pledge Music distribution platform with a plethora of bonus options and extras designed to allow music fans a deeper and richer experience.

About An 80th Birthday Celebration Album

An 80th Birthday Celebration was recorded live in NYC in November 2014 while Ellis was celebrating his 80th birthday with his quartet at Jazz at Lincoln Center’s Dizzy’s Club Coca-Cola. With an all-star cast including Derek Douget on tenor and soprano saxophones, Jason Stewart on bass, and Herlin Riley on drums, the quartet produces a magical night of music which illustrates why Ellis was made a National Endowment of the Arts Jazz Master.

“Since Ellis is celebrating his 82nd birthday this year, we wanted to do something to celebrate it in a unique way," says Nu Jazz Agency Managing Director, Jerald Miller. “This album was recorded two years ago and we thought there would be no better way to share this year’s birthday celebration with legions of music lovers around the world, than through the Pledge Music platform."

The project is being released in a pre-order campaign through Pledge Music, where you can “pre-purchase the two-disc vinyl album on 180 gram vinyl either with or without an autograph. If you purchase an autographed version you will receive a digital version of the album, which includes a bonus audio track, not available on vinyl. Additionally, for music collectors around the world, a limited edition test pressing that is autographed and numbered, may be purchased as well.

In acknowledgement of Ellis’ 82nd birthday he will be performing a week-long stint at Jazz at Lincoln Center’s Dizzy's Club Coca-Cola November 10-13, 2016. Music lovers will also be able to engage in a series of musical experiences designed for the fan and connoisseur alike. Through PledgeMusic.com fans can purchase numerous experiences ranging from (two) tickets with premiere seating to his sold-out (four) night series with a private meet & greet and (two) autographed CD’s of a “classic” Ellis Marsalis album; to a private lesson with Ellis Marsalis; to customized “Anniversary” or “Birthday” greetings. A portion of the proceeds goes to benefit the Ellis Marsalis Center for Music, a performance & education non-profit for underserved children, youth, and musicians in the New Orleans area.

The two disc album includes (10) tracks: (Disc 1) Teo; La Ronde; Creole Love Call; Mozartin’; and Dolphin Dance; while (Disc 2) contains: Monkey Puzzle; Whistle Stop; Monk’s Mood; Bloomdido; and Happy Birthday (Second Line). “This was a very special night to me,” says Ellis Marsalis. “Not only because I was able to celebrate my birthday around so many family and friends, but because I was playing at a jazz club in New York City which one of my sons was pivotal in making. I was completely surprised by the tribute Wynton and the other musicians gave me at the end of the night. I have known some of those guys for almost 40 years, and I am glad that we could find a way to share this music, in a way which is meaningful.”

The album is only available for pre-order through January 15, 2017 and will not be available on CD or through popular digital download stores or streaming services. “This album is not meant to be a typical release," says Jerald Miller. “It's meant to be a special experience for the true music lover. It’s celebrates a truly remarkable man for a truly remarkable occasion and is a once-in-a-life-time experience, and only for a chosen few. PledgeMusic.com was the right platform for us because it allowed us to give fans real experiences that would mean something for them as a special way of saying 'thank you' for loving great music."