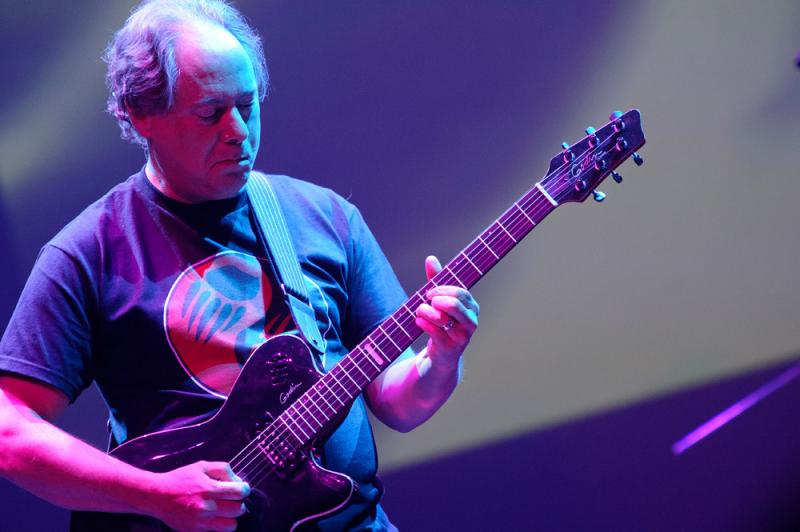 slideshow
DENNIS REA, guitarist and leader of critically acclaimed bands IRON KIM STYLE and MORAINE (which performed at the recent NearFest 2010), has released his solo album Views from Chicheng Precipice

Internationally acclaimed for his work with art-rock juggernaut Moraine and free-jazz provocateurs Iron Kim Style (MoonJune Records MJR028 and MJR031), guitarist and composer Dennis Rea presents a completely different but equally compelling facet of his musical personality with his most ambitious release to date, Views from Chicheng Precipice. A key presence on the Pacific Northwest creative music scene for decades, Dennis Rea was also a pioneer in introducing modern jazz, adventurous rock, and experimental music to Chinese audiences, as detailed in his book Live at the Forbidden City: Musical Encounters in China and Taiwan. While living in both locales from 1989 to 1993 and on subsequent concert tours and travels, Rea became deeply enamored of the traditional music of China, Japan, Korea, and Vietnam. Views from Chicheng Precipice is Rea's homage to the music of East Asia, a collection of uniquely personalized interpretations of traditional pieces and original Asian-inspired works, performed by some of the Pacific Northwest's most renowned instrumentalists, including trombone avatar Stuart Dempster and koto master Elizabeth Falconer. Blending striking arrangements of ancient and contemporary themes with sonic experimentation and expansive improvisation, Views from Chicheng Precipice is at once boldly unorthodox in its choice of instrumentation and treatment of traditional musical material, and warmly respectful of its sources. The result is a sonorous and surprising listening experience that goes far beyond typical attempts at 'East-West fusion.'

“In formulating these arrangements of some of my favorite Chinese, Taiwanese, and East Asian ethnic minority pieces, I sometimes chose to honor traditional formal constraints, e.g., limiting improvisers to a particular set of scale tones, or eschewing the use of Western-style functional harmony. In other cases I threw custom to the winds--harmonizing passages, employing atypical instrumentation, and incorporating noise, chromaticism, free improvisation, and amplification--while striving to remain faithful to the spirit of my models. The project is my 'love letter' to a part of the world that has enriched my life immeasurably, musically and otherwise." --Dennis Rea